SEOUL, Feb. 28 (Yonhap) -- The Hanoi summit between the leaders of the U.S. and North Korea on Thursday ended without a deal on issues surrounding sanctions and denuclearization, but South Korean firms are still expecting breakthroughs going forward.

The much-anticipated second summit between U.S. President Donald Trump and North Korean leader Kim Jong-un failed to find a compromise on their demands for sanctions relief and more denuclearization measures.

Considerable hope had built up that a successful summit between the two leaders could pave the way for the reopening of the jointly-run inter-Korean industrial complex in the border city of Kaesong and the resumption of tours to Mount Kumgang.

The industrial park, opened in 2004, was closed three years ago following North Korean provocations, while the Mount Kumgang tours were halted after the fatal shooting of a South Korean tourist in 2008, who may have mistakenly strayed into a off-limits area.

Observers said Pyongyang had pressed for comprehensive sanctions relief as corresponding measures for the steps it has taken since their first summit in Singapore last year, such as dismantling a nuclear and missile test site.

Washington, on the other hand, demanded concrete denuclearization steps before making any concessions.

"The results (from the Hanoi summit) are not what we want, but we will further prepare for inter-Korean business projects with hopes and expectations for the resumption of stalled businesses," said an official at Hyundai Asan Corp.

Early this month, Hyundai Asan, which had been at the forefront of inter-Korean business ties, held a ceremony in the North to commemorate the 20th anniversary of the establishment of its North Korean business arm.

The industrial park in the North's border town of Kaesong was hailed as a key symbol of economic cooperation between the rival Koreas as it combined South Korean capital and technology with cheap labor from North Korea.

More than 120 South Korean firms had operated plants in the Kaesong complex, though they left there on short notice and have not been granted government permission to visit the complex.

"It is very regrettable, but the collapse of the summit does not mean an end, and we think outstanding issues can be resolved," the association of the South Korean firms operating factories in Kaesong said.

The resumption of operations at the Kaesong complex has been viewed as difficult task in regard to the sanctions imposed on North Korea. After the closure of the industrial complex, the international community reinforced sanctions against North Korea as the communist state pursued nuclear weapons development.

Under the sanctions imposed by United Nations Security Council (UNSC) and the United States, financial transactions and imports of North Korean products have been prohibited, stifling North Korea's economy.

The U.S.-led sanctions on North Korea have been also been a headache for the South Korean businesspeople who own factories in the complex.

They applied for a visit to the complex, but without consultations with Washington and sanctions still being enforced, the business owners have effectively been barred from going to the North.

South Korean President Moon Jae-in said earlier the suspended tourism program to Mount Kumgang will likely be the first thing to be resumed in a post-sanctions era. 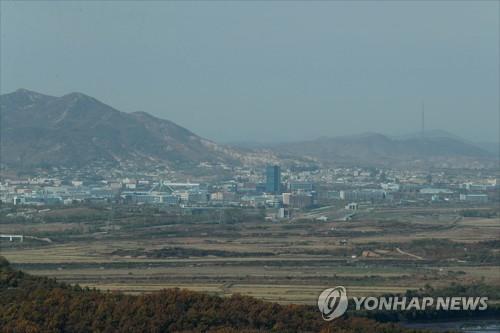