The Korean won weakened against U.S. dollar after falling steeply right before the market's close. It finished at 1,124.70 won against the U.S. greenback, down 5.6 won from the previous day's close.

Around the time the market closed, the White House said it would cut short its summit schedule, hinting at a rupture in the high-stakes meeting.

Canceling their working lunch and the signing ceremony for a joint declaration, Trump held a solo press conference two hours ahead of schedule and said he could not accept the North's call for the lifting of all sanctions without complete denuclearization.

Geopolitical uncertainties over the North's nuclear ambitions have been one of the key causes of the so-called Korea discount among overseas investors.

Such a "triple weakness" is often seen in cases of capital outflow from the domestic market.

"As there have been ups and downs in the denuclearization process, today's development would not appear to seriously damage the market in the long run," Seo Sang-young, an analyst at Kiwoom Securities, said.

"But shares linked to inter-Korean economic projects could suffer a freefall," he added.

Share prices of companies that could have benefited from close economic cooperation had risen in recent trading sessions on the prospect of more business opportunities. 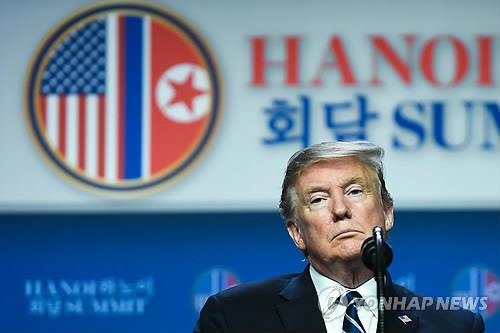