HANOI, Feb. 28 (Yonhap) -- When Kim Jong-un chose to travel nearly 4,000 kilometers by train to meet Donald Trump, it was only the beginning of a long and bumpy road to disarmament and peace, which remains out of reach after many handshakes, pleasantries and two days of talks.

The North Korean leader and the U.S. president once again became the center of world attention as they met a second time following their historic first summit in Singapore in June.

The big question for many was whether two of the world's most charismatic leaders could strike a deal to take down the North's nuclear weapons and ballistic missile programs in exchange for U.S. concessions.

While that question hung in the balance, for reporters on the ground -- or at least those who were here with the White House press corps -- the first and immediate worry was that they were forced to move out of their hotel workspace to make room for Kim.

They were informed just as the North Korean leader pulled into a train station on the Vietnam-China border, leading some to protest that the White House had effectively made another concession to Kim, after agreeing to hold the summit in Hanoi instead of Trump's preferred location of Da Nang. 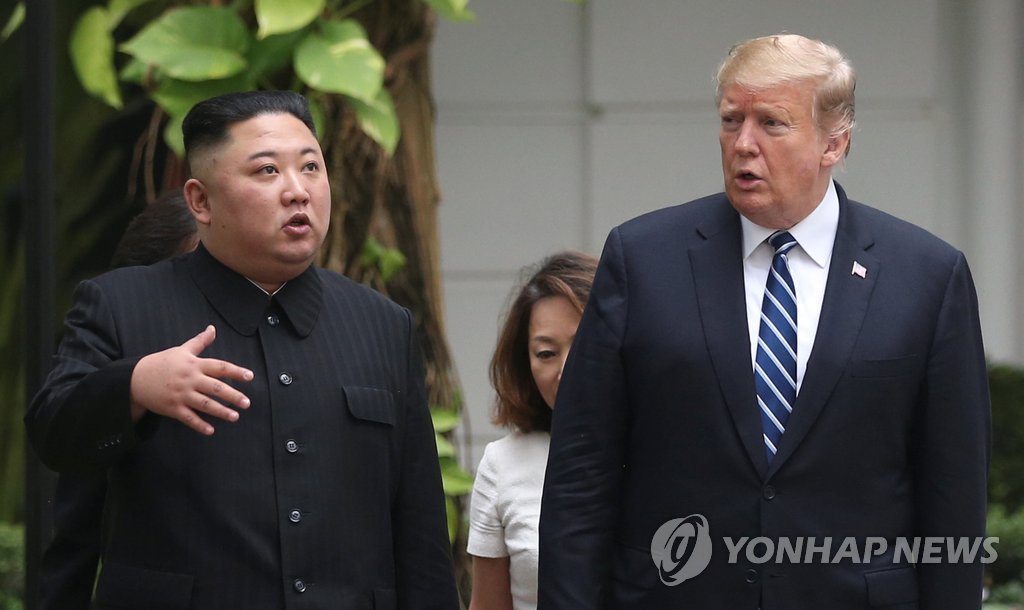 Then it appeared to be smooth sailing for a while.

His meetings the next day with Vietnamese leaders offered nothing out of the ordinary, although he praised Vietnam, a former U.S. adversary, and touted it as an economic model for the North.

When the reunion happened, it was eerily similar to the first summit in Singapore, with the two leaders walking toward each other to shake hands in front of a row of American and North Korean flags.

They stopped. Trump patted Kim lightly on his back and the younger leader returned the gesture on the president's arm.

A moment of awkwardness fell before Trump fielded a couple of questions from a few reporters.

For two people who "fell in love" after Singapore, according to Trump, the exchange was at best cordial.

Shortly after, when they emerged from a closed-door one-on-one for dinner, the mood was markedly more relaxed as they joked about the "interesting dialogue" they had shared for 30 minutes in private.

"Interesting" was Kim's characterization of the talks, to which Trump responded, "Boy, if you could have heard that dialogue. What you would pay for that dialogue."

Day 2 began amid hope that a deal was within reach.

Although Trump repeated that he was "in no rush," the two men had a full schedule ahead of them with one-on-one talks, expanded talks, a working lunch and a signing ceremony.

They walked briefly by a hotel pool surrounded by lush greenery and Kim later spoke, probably for the first time, to foreign reporters about how he wouldn't have come all this way if he had no intention to abandon his nuclear program.

He welcomed the idea of a U.S. liaison office opening in Pyongyang, and Trump offered his approval.

But then, as reporters were rushed into place for Trump's post-summit press conference, the mood changed.

Talk that the presser had been moved up two hours began to swirl. That was soon followed by confirmation from the White House and a statement that the leaders had failed to reach an agreement but would seek to meet again.

The lunch and signing ceremony were called off.

Within minutes, Trump confirmed that he had decided to "walk" because he couldn't lift sanctions on the regime without concrete denuclearization steps from the North.

Perhaps the deal fell through late Wednesday, given that the press were called to be in place at least two hours earlier than they had been in Singapore, indicating the White House may have been preparing to move the press conference up.

Or like Kim said Thursday, perhaps it was meant to be a "fantasy movie."

(US-NK summit) What happened, or didn't happen, when Trump and Kim met again

(US-NK summit) What happened, or didn't happen, when Trump and Kim met again