(ATTN: RESTRUCTURES throughout)
By Lee Chi-dong

HANOI, March 1 (Yonhap) -- North Korean leader Kim Jong-un plans to head back home from Hanoi on Saturday morning, earlier than initially scheduled, a diplomatic source said, amid speculation about whether the decision is linked to his unsuccessful summit with U.S. President Donald Trump.

Kim plans to leave for a border train station in Dong Dang at around 10 a.m. Saturday, wrapping up his two-day official visit to Vietnam, according to the source.

Vietnam's foreign ministry had earlier said Kim would head back to Pyongyang on Saturday afternoon.

It has not been confirmed yet whether Kim's return schedule change is related to the outcome of the summit with Trump earlier this week.

They finished the session abruptly around noon Thursday without issuing a joint statement.

Kim has stayed at his luxury hotel without issuing any public message in person since the summit.

The country's foreign minister, Ri Yong-ho, instead held a sudden late-night press conference and said his regime demanded partial sanctions relief for its dismantlement of the Yongbyon nuclear complex in the negotiations.

He was countering Trump's statement that Pyongyang had called for the lifting of all sanctions against it, a price he wouldn't pay for the Yongbyon facilities alone.

The two sides, however, reaffirmed a commitment to continued dialogue.

Kim is scheduled to hold summit talks with Vietnamese President Nguyen Phu Trong on Friday afternoon after inspecting an honor guard in front of the presidential palace, the source said.

He will also meet with Prime Minister Nguyen Xuan Phuc, followed by a banquet.

Another source said Kim may visit the Vietnam-DPRK Friendship Kindergarten in Hanoi earlier in the day. DPRK is the initialism of North Korea's official name, the Democratic People's Republic of Korea. 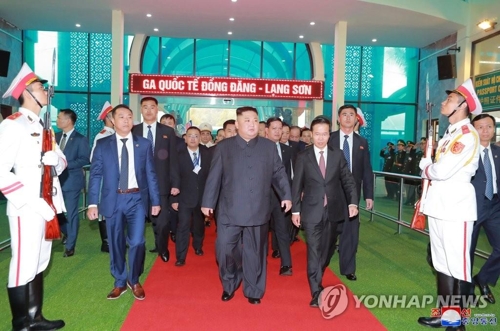 Before departure on Saturday morning, Kim plans a brief visit to the Ho Chi Minh Mausoleum, which commemorates the former leader of the Southeast Asian nation.

Kim is the first North Korean leader in 55 years to make a bilateral visit to Vietnam. His late grandfather, Kim Il-sung, who founded North Korea, traveled to the country in 1958 and 1964.

Kim is expected to focus on strengthening relations between Pyongyang and Hanoi during the rest of his stay. Vietnam is said to be a potential model for his impoverished communist nation that's in a desperate but troubled pursuit of economic growth.

He's apparently taking a similar trip back to his 66-hour journey to Hanoi. There's a possibility that he will stop in Beijing for talks with President Xi Jinping.