By Lee Chi-dong and Chung Binna

HANOI, March 1 (Yonhap) -- A senior North Korean diplomat on Friday questioned the need to continue denuclearization talks with the United States, saying leader Kim Jong-un appears to be changing his mind as well.

In an interview with Yonhap News Agency and a few other South Korean news outlets here, Vice Foreign Minister Choe Son-hui claimed that her country should be rewarded adequately for more than a year of halts to nuclear and long-range missile testing: with the lifting of at least some U.N. sanctions.

A day earlier, the second summit between North Korean leader Kim Jong-un and U.S. President Donald Trump in Hanoi ended without an agreement. The two sides said the preconditions for sanctions relief was a key sticking point.

"I think about whether (we) should continue talks," she said, recalling leader Kim Jong-un's New Year's message, in which he said his regime will be left with no other choice than pursuing a "different path" to dialogue unless the U.S. takes reciprocal steps. 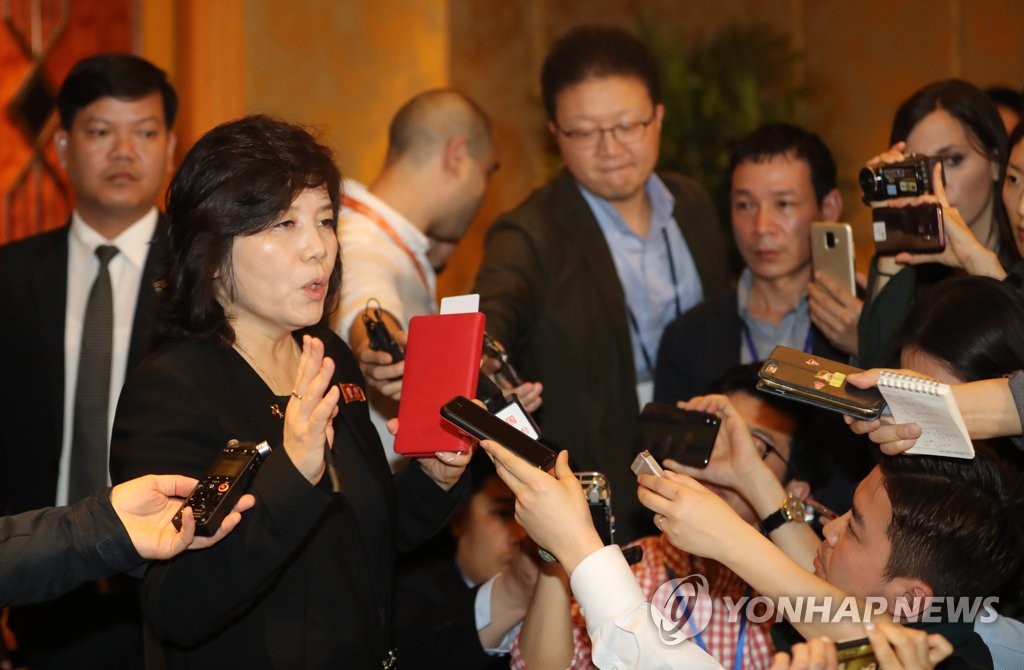 "I (got) a feeling that (Chairman Kim) is changing his thought a bit" toward the negotiations with the U.S., Choe said. "It's my personal feeling."

Choe said her country has already taken a lot of goodwill measures.

Especially, she emphasized, it has stayed away from nuclear and missile tests for 15 months.

A wide web of U.N. sanctions on North Korea is attributable to its repeated provocations earlier. And, according to Choe, related Security Council resolutions stipulate that those sanctions will be removed if Pyongyang does not continue such actions.

Still, amid the lack of any sign that the U.N. will lift the sanctions, the U.S. has gone too far toward the "reckless assertion" that North Korea should dismantle nuclear and missile facilities, Choe said.

She accused the Trump administration of having moved the goal posts, saying it initially talked about dismantling the Yongbyon nuclear complex and is now taking issue with other sites as well.

The official said Kim had put forward his "best offer" of dismantling the Yongbyon facilities under the inspection of U.S. nuclear experts.

Choe said she also got the impression that Kim feels "very odd" about the way the U.S. calculates the price of the Yongbyon dismantlement.

"We have lots of thinking about the U.S. response," she said.

Her remarks came amid concerns and doubts about the future of the denuclearization process after the Trump-Kim talks collapsed.

But Choe's view is apparently representative of displeasure and frustration among North Koreans over the U.S. attitude at the bargaining table.

She is a career diplomat, having long handled U.S.-related affairs at the foreign ministry. She participated in the six-party nuclear talks, which were last held in December 2008, as a member of North Korea's delegation.