"We will seek various ways to create a venue for the resumption of North Korea-U.S. dialogue," Foreign Minister Kang Kyung-wha said in the session, which Moon convened to discuss future steps after U.S. President Donald Trump and North Korean leader Kim Jong-un ended their second summit without an agreement in Hanoi last week.

The three countries held a similar meeting in Sweden shortly before the Trump-Kim summit.

In the NSC meeting, the South Korean leader insisted the U.S. and North Korea will eventually reach an agreement.

"I believe the North Korea-U.S. negotiations will reach an agreement in the end, but I ask you to work for an early resumption of working-level dialogue between the two because we do not want the stalemate to be prolonged," he told the meeting, according to Cheong Wa Dae pool reports.

"North Korea is expected to go through a process of reviewing its strategy toward the U.S. and South Korea after evaluating the outcome of this (U.S.-North Korea) summit. It appears the country will need time to tend to its local political schedule and control the situation," Unification Minister Cho Myoung-gyon said in his report, according to the Cheong Wa Dae spokesman.

The NSC meeting was the first to be chaired by Moon in about nine months. 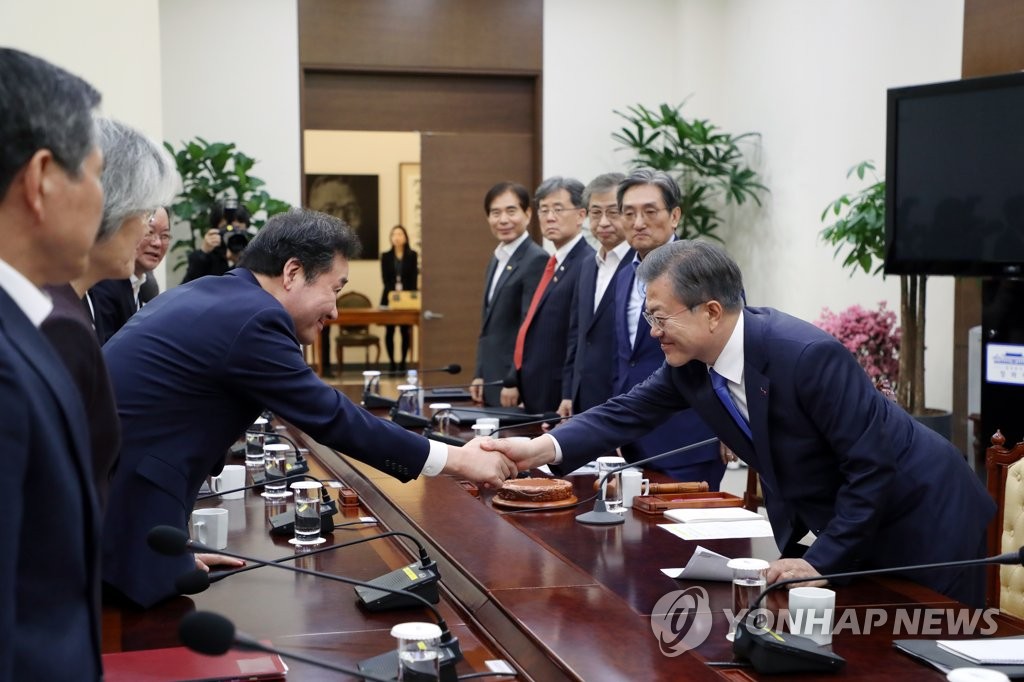 In a press conference shortly after their meeting in Hanoi, Trump said the North demanded all U.S. and international sanctions be lifted in their entirety but only offered to give up its well-known nuclear facilities in Yongbyon.

The U.S. president made it clear that there are more nuclear facilities or weapons the North must dismantle to reach complete denuclearization.

Moon said the second Trump-Kim meeting in Hanoi was still a success.

"The second North Korea-U.S. summit, though it is very disappointing in its result, was a chance to confirm the very meaningful progress that has been made through dialogue between the two countries," he said, according to Cheong Wa Dae pool reports.

Moon also stressed that the fact both Washington and Pyongyang have refrained from escalating tension, even after their failure to reach an agreement, suggested the possibility of progress in the future.

The South Korean president noted the summit hinted at the prospect of permanently shutting down the Yongbyon facilities, which he said would mean the North's denuclearization process entering a phase of no-return.

"First, complete shutdown of the Yongbyon nuclear facilities was discussed. Permanently dismantling the Yongbyon facilities, which are the backbone of North Korea's nuclear program, under the observation and inspection of the United States has come into view," he said.

"Should the Yongbyon nuclear facilities that include plutonium reprocessing facilities and uranium enrichment facilities be fully and completely dismantled, North Korea's denuclearization process could be said to have entered an irreversible stage," the president added.

To this end, Moon told his top security officials to seek ways to narrow the difference between the U.S. and North Korea.

"First, I ask you to accurately identify the difference that prevented the two sides from reaching an agreement at the latest North Korea-U.S. summit and find ways to narrow that difference," he said.

In a telephone conversation made shortly after his Hanoi summit, Trump asked Moon to help narrow the gap between his country and North Korea by speaking with the North Korean side first and then letting him know the outcome of the inter-Korean dialogue.

President Moon noted one way to promote future dialogue may be improving his country's own relations with the communist North.

"Second, I ask you to actively find ways to assist North Korea-U.S. dialogue by developing inter-Korean relations within the boundaries of sanctions. In addition, I ask you to prepare for (the start) of inter-Korean cooperation projects that were reached under the Panmunjom Declaration and Pyongyang Declaration," Moon said.

The South Korean president earlier proposed the U.S. use inter-Korean economic cooperation as one of its options in rewarding North Korea for its denuclearization steps.

At Monday's meeting, the unification minister told Moon that the government will seek talks with the United States to find ways to resume private tours to North Korea's Mount Kumgang and to reopen the joint industrial park in North Korea's Kaesong, the Cheong Wa Dae spokesman told a briefing.

Defense Minister Jeong Kyeong-doo said the ministry will seek to hold military dialogue with North Korea this month to discuss ways to implement a military agreement signed last year, according to the spokesman.

"We hope the two countries will continue their dialogue and that their two leaders will meet again in the near future and reach the agreement that they failed to reach this time," Moon told the NSC meeting.

Meanwhile, the Cheong Wa Dae spokesman dismissed speculations that the U.S. may not be sharing all its information on the North Korean nuclear program with South Korea, saying the allies completely shared all their information.

Trump earlier said the North appeared to be surprised to learn the U.S. had information about the North's nuclear facilities or stockpile when he asked the country to give up more than the Yongbyon facilities.

His remarks, however, also raised questions about whether South Korea knew about such facilities or nuclear stockpile.

Kim said that whether President Trump was referring to additional facilities or weapons was not clear.

"But even if it was the former, the intelligence communities of South Korea and the United States are completely sharing the related information," he said.

"We believe North Korea too knows the intelligence communities of South Korea and the United States know all about North Korean facilities," the spokesman added.