Cho and Li held talks in the Chinese capital on Feb. 26 and agreed to exchange weather forecast information and technology to establish an early warning system for fine dust. The two ministers also agreed to conduct joint research to search for the origins of air pollutants and reduce fine dust pollution in Northeast Asia. 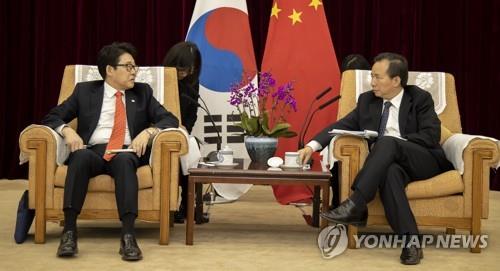 "The two countries will conduct joint research on the origins of fine dust and the cause of high concentrations of ultrafine particles through the South Korea-China Environmental Cooperation Center set up in Beijing last June," said Cho in a meeting with senior journalists in Seoul.

Cho made the remarks the same day President Moon Jae-in ordered his government to work together with China to fight fine dust pollution.

Moon instructed his government to discuss dust-reducing measures with China and look into the possibility of jointly creating artificial rain over the sea between the two countries.

Moon's government has recently begun to map out comprehensive measures against the fine dust problem, as nationwide concentrations of ultrafine particles have surged to record levels in recent months. 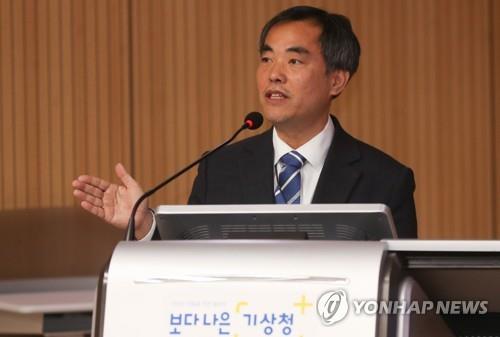 In this regard, the National Institute of Meteorological Sciences (NIMS), an affiliate of the Korea Meteorological Administration, said it will speed up negotiations with China over a joint artificial rain experiment.

Joo Sang-won, chief of the NIMS, told Yonhap News by phone that his institute had planned to invite Chinese artificial rain experts during the first half of this year but will push to bring this forward after Moon's directive.

Joo and NIMS officials last year visited the Chinese Academy of Meteorological Sciences to discuss personnel exchanges and other cooperation, as China is known as one of the world's leaders in the field of artificial rain, along with the United States.

The NIMS conducted its first experiment to artificially make rain over the Yellow Sea on Jan. 25 to fight air pollution, but the attempt ended in failure.

Among them, the number of diesel vehicles will be gradually reduced in the public sector, the minister said.

Instead, the government will expand the supply of eco-friendly vehicles, increasing the number of electric cars to 430,000 and hydrogen cars to 65,000 by 2022, he noted.

The government will consider introducing a mandatory sales quota for eco-friendly vehicles in 2020 to replace vans, trucks and other heavy emitters of pollutants, he said.

The United States and China have already introduced such quotas for electric and hydrogen cars.

The Seoul Research Institute of Public Health and Environment said Wednesday morning that pollutants from China are responsible for 50 to 70 percent of fine dust pollution over the capital area.