SEOUL, March 6 (Yonhap) -- South Korea will take emergency measures to curb fine dust for the seventh consecutive day on Thursday, but the level of air pollution is likely to subdue in the late afternoon, officials said.

Most of the country was blanketed by extraordinarily high levels of fine dust on Wednesday, prompting the country to limit the operation of coal power stations, construction sites and heavy vehicles. Such emergency steps have been taken in Seoul and several other local governments for the sixth consecutive day -- the longest period ever -- according to the Ministry of Environment.

The level of ultrafine particles smaller than 2.5 micrometers in diameter, or PM 2.5, reached 111 micrograms per cubic meter in Seoul as of 3 p.m., according to the National Institute of Environmental Research (NIER).

The concentrations of PM 2.5, known as a class one carcinogen, were also in far excess of the recommended levels of the World Health Organization (WHO) elsewhere in South Korea, reaching 113 micrograms per cubic meter in Gyeonggi Province, 96 in South Chungcheong Province and 95 in Incheon, the institute said. 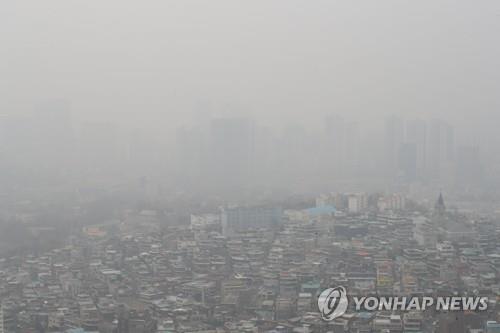 South Korea's authorities classify levels of PM 2.5 above 35 micrograms per cubic meter as "bad" and above 75 micrograms as "very bad," while the WHO recommends keeping levels below 25 micrograms.

The density of dust particles smaller than 10 micrometers in diameter, or PM 10, also rose to record levels, reaching 160 micrograms per cubic meter in Seoul and Gyeonggi Province and 146 in Sejong as of 3 p.m.

The NIER forecast that most of the nation will again be hit hard by "bad" levels of fine and ultrafine particles on Thursday but that air quality will improve in the late afternoon as dust is likely to be blown away by wind from the north. The conditions will remain good on Friday, it said.

According to the Korea Meteorological Administration, light rain is forecast for some areas in the capital between Wednesday and Thursday. 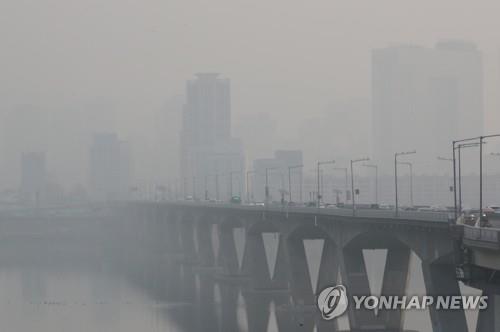 On Tuesday, the worst levels of fine dust pollution were observed throughout the nation. In Seoul, the daily average of PM 2.5 surged to 142 micrograms as of 7 p.m. Previously, Seoul recorded 129 micrograms of ultrafine particles as the daily average on Jan. 14 this year, the record-high figure since relevant record keeping began in 2015. On Monday, the capital's daily average figure was 117 micrograms, the second highest on record.

The Seoul Research Institute of Public Health and Environment said Wednesday morning that pollutants from China are responsible for 50 to 70 percent of fine dust pollution over the capital area.

According to South Korea's environment minister, China expressed a strong willingness to curb air pollution during a recent ministerial meeting in Beijing.

Earlier in the day, President Moon Jae-in ordered his government to work together with China to fight fine dust pollution.

Moon instructed his government to discuss dust-reducing measures with China and look into the possibility of jointly creating artificial rain over the sea between the two countries.

Moon's government has recently begun to map out comprehensive measures against the fine dust problem, as nationwide concentrations of ultrafine particles have surged to record levels in recent months.