SEOUL, March 6 (Yonhap) -- U.S. National Security Adviser John Bolton has warned that North Korea will face tougher sanctions if it continues to refuse to denuclearize, a remark that risks renewing tensions with Pyongyang.

Despite a failure to strike a summit deal in Hanoi last week, he emphasized, time is on Washington's side.

"If they're not willing to do it, President (Donald) Trump has been very clear they're not getting relief from the crushing economic sanctions that have been imposed on them," he said in an interview with the Fox Business Network on Tuesday evening (Washington D.C. time). "And we'll look at ramping those sanctions up, in fact." 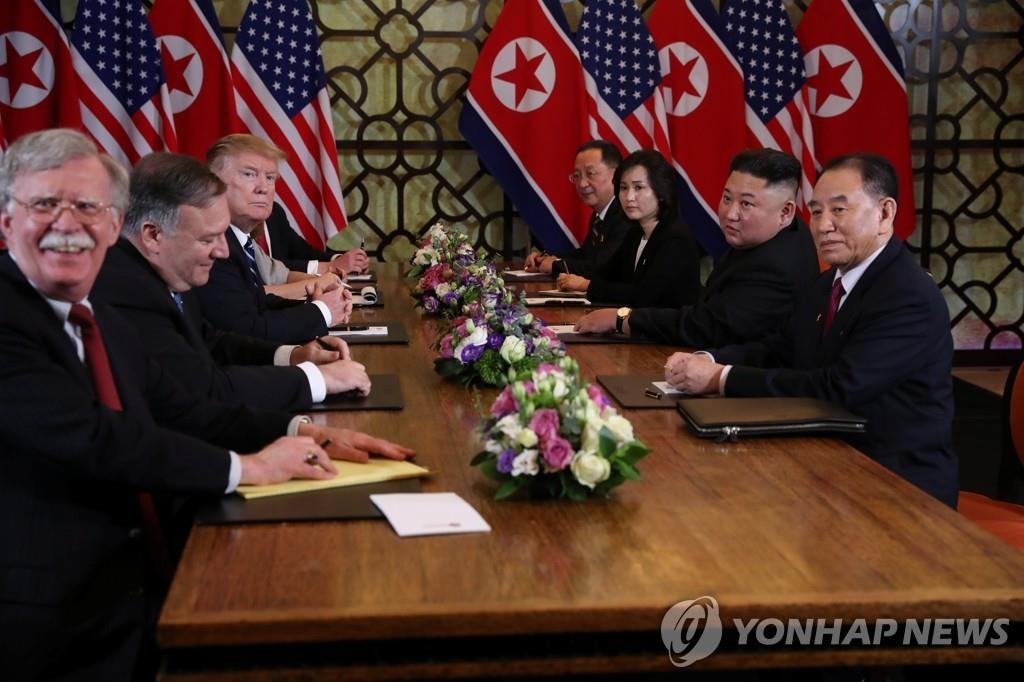 The warning is apparently aimed at putting pressure on North Korea amid growing skepticism about the shaky denuclearization process.

Trump had his second summit with North Korean leader Kim Jong-un in the Vietnamese capital on Feb. 27 and 28. The talks were truncated abruptly and concluded without a joint statement.

Both sides told media later that U.N.-led sanctions were a major sticking point. Kim demanded the U.S. lift five of the 11 sanctions in place against his communist regime, saying they impede the livelihood of its people. Kim offered to dismantle the Yongbyon nuclear complex under the monitoring of U.S. experts.

Trump, however, regarded his proposal unreasonable and walked away.

Bolton said the U.S. wouldn't "buy the same pony that they've sold to previous administrations" and urged North Korea "to go back and reassess their strategy."

He said if Trump had accepted Kim's offer, it would have "given North Korea a lifeline, giving them a chance to get their breath back economically while potentially still concealing a lot of nuclear weapons capabilities, missiles and the rest of it."

He added the ball is in North Korea's court, reiterating that the U.S. still wants dialogue and will wait for positive signs from Pyongyang.

"We're going to see a lot of potential decisions coming out of North Korea, whether they're serious about the talks, whether they want to get back into them and fundamentally whether they're committed to giving up their nuclear weapons program and everything associated with it," he said.

Bolton, known to be hawkish on North Korea, said Trump did "the right thing" in Hanoi but remains open to nuclear talks with Kim.

Speaking separately to Fox News Radio, the official said, "He's still got the door open, they could have a bright, economic future -- just give up all your weapons of mass destruction and ballistic missiles."

Bolton earlier said that he "submitted a large document with the requirements for denuclearization," written in both Korean and English, to North Korea -- the so-called "big deal" document.

Meanwhile, North Korea has restored part of a long-range missile launch site near the border with China, backtracking on its pledge to get rid of it, South Korea's state spy agency told local lawmakers.

The report by the National Intelligence Service on the Tongchang-ri area, also known as Sohae launch facility, was backed by two U.S.-based think tanks' analyses of related satellite images.

The reclusive nation is "pursuing a rapid rebuilding" at the site, the Centre for Strategic and International Studies (CSIS) said.

"Activity is evident at the vertical engine test stand and the launch pad's rail-mounted rocket transfer structure," it said. "Significantly, the environmental shelters on the umbilical tower, which are normally closed, have been opened to show the launch pad."