SEOUL, March 6 (Yonhap) -- South Korea's first lady Kim Jung-sook held a special meeting Wednesday with students from Brunei, Cambodia and Malaysia, countries that she and her husband, President Moon Jae-in, are set to visit next week.

The meeting held at the presidential office Cheong Wa Dae was attended by 29 students from the three countries.

Kim highlighted the long history of her country's friendship with the countries that are also members of the Association of Southeast Asian Nations (ASEAN).

"I heard the number of ASEAN students studying in South Korea is growing under our administration. That is very good news. Countries, as well as individuals, become closer when they communicate and visit each other," she said at the meeting, according to Cheong Wa Dae pool reports. 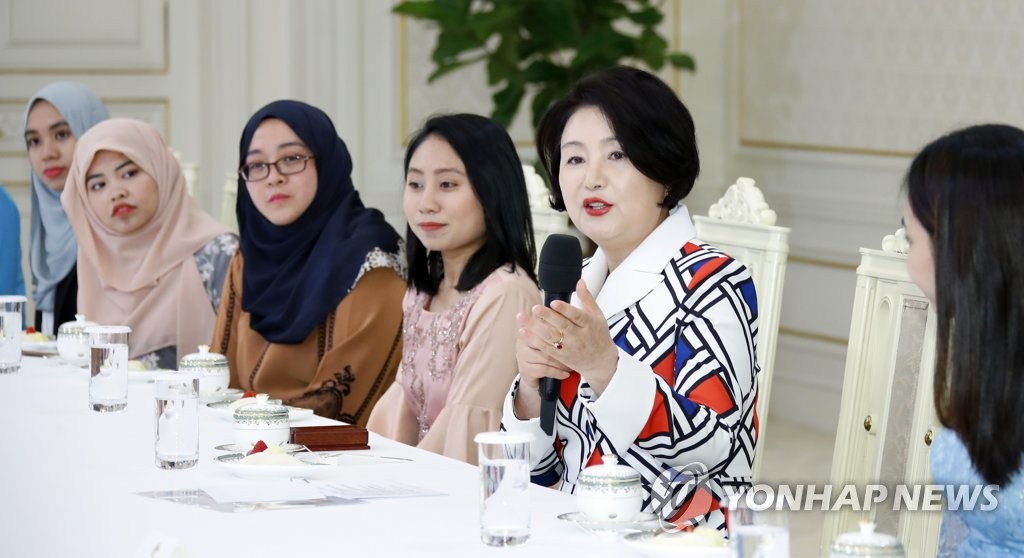 Noting the country was seeking to greatly improve its relations with ASEAN countries under its New Southern Policy, Kim said the students here will be a strong foundation for a continued relationship in the future.

"Should you work as a bridge between South Korea and ASEAN while working here or back in your homeland, the joint community for peace the New Southern Policy seeks to build will further become possible," she said.

"Providing a better education environment to students who come to South Korea to study, such as yourselves, will be an important first step toward a joint community of South Korea and ASEAN," Kim said.

Moon and Kim will embark on a seven-day trip on Sunday to the three Southeast Asian countries.