KDB, the largest shareholder with a 55.7 percent stake in Daewoo Shipbuilding, signed a preliminary deal with Hyundai Heavy last month to sell its stake.

Under the deal estimated at over 2 trillion won (US$1.78 billion), KDB will hand over its Daewoo Shipbuilding stocks to an entity to be set up later by Hyundai Heavy, in return for 1.25 trillion won worth of stocks to be sold later by the entity.

Hyundai Heavy will also chip in a total of 2.5 trillion won in the entity, which will be used to repay Daewoo Shipbuilding's debts, according to Hyundai Heavy.

Hyundai Heavy said the entity will hold about a 68 percent stake in Daewoo Shipbuilding, with KDB becoming the second-largest shareholder.

"The deal is part of efforts to help boost the competitiveness of our country's shipbuilding industry," KDB chairman Lee Dong-gull said during a press conference. "Eventually, the deal is also aimed at providing stable job offerings and boosting the local economy."

Hyundai Heavy will hold a shareholder meeting to approve a spin-off plan and will set up an entity to receive Daewoo Shipbuilding stocks from KDB, after the regulatory process is completed. 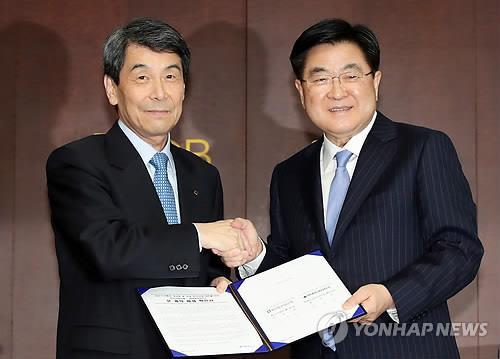 Should the deal proceed as planned, Hyundai Heavy Industries Holdings Co., the parent of Hyundai Heavy, will hold a 26 percent stake in the new entity, with KDB owning 18 percent, they said earlier.

If the takeover goes ahead, the South Korean shipbuilding industry is expected to be dominated by two major shipbuilders -- Hyundai Heavy and Samsung Heavy.

South Korean shipbuilders, once a cornerstone of the country's economic growth and job creation, had been reeling from mounting losses in the past few years, caused by an industrywide slump and a glut of vessels amid tough competition with Chinese rivals.

The combination of the two shipbuilders would create an unrivaled player in the sector. As of last year, Hyundai Heavy had an order backlog totaling 11.14 million compensated gross tons (CGTs), the largest among others in the sector. The comparable figure for Daewoo Shipbuilding was 5.84 million CGTs.

Their combined order backlog accounts for 21.2 percent of the total around the globe. 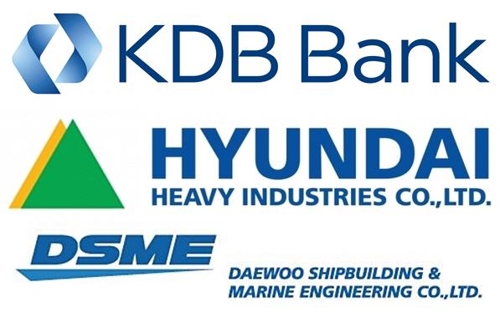 But industry sources said the takeover needs to overcome strong opposition from unionized workers at the two shipbuilders. The labor unions at Hyundai Heavy and Daewoo Shipbuilding fiercely opposed the deal claiming it could lead to massive layoffs going forward.

In addition, because the tie-up of the two major shipyards could reshape the global shipbuilding sector, the deal needs to get regulatory approvals from foreign anti-competition authorities. The approval is key to the completion of the mega deal.

Local shipyards bagged orders to build 60 LNG ships last year, almost sweeping all such deals placed around the world and making up for the dearth of demand for high-priced offshore facilities.

The merger of the two is expected to double the value of their outstanding orders for LNG ships to over US$12 billion.

According to the data compiled by ship evaluator VesselsValue, the order book for LNG ships by Daewoo Shipbuilding is estimated at $6.85 billion, with the corresponding figure for Hyundai Heavy being $6.01 billion.

The consolidation of yards can help improve pricing power overall and should reduce loss-making projects that the yards undertook in the past five years or so.

Daewoo Shipbuilding ended a debt rescheduling program in August 2001 after being told to streamline operations in August 1999. Its parent Daewoo Group collapsed under heavy debt in the wake of the 1997 financial crisis.

In 2009, KDB put Daewoo Shipbuilding back on the block after scrapping a deal to sell a controlling stake in the shipyard to Hanwha Group.

So far, up to 10 trillion won has been spent to salvage Daewoo Shipbuilding.

Meanwhile, hundreds of Daewoo Shipbuilding unionists clashed with riot police in front of KDB's headquarters in Seoul as they attempted to storm into the office building to block the signing ceremony.

Hyundai Heavy has said it will ensure job security to Daewoo Shipbuilding workers should productivity be maintained.

Hyundai Heavy closed at 125,500 won on the Seoul bourse, down 3.8 percent from the previous session's close, with Daewoo Shipbuilding remaining flat at 30,200 won. The benchmark index, the KOSPI, shed 1.31 percent. 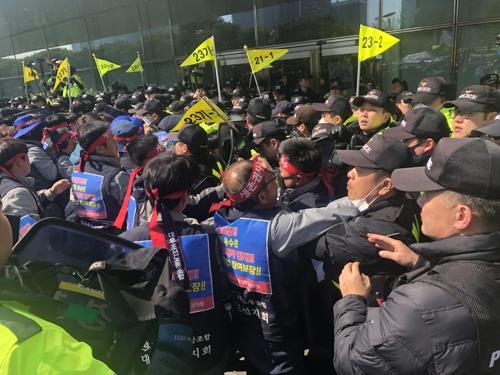