In a bilateral summit held in the Bruneian capital, President Moon Jae-in and Sultan Hassanal Bolkiah noted the countries have steadily developed their friendly relations in the infrastructure and energy sectors over the past 35 years since they established diplomatic ties, Moon's presidential office Cheong Wa Dae said in a press release. 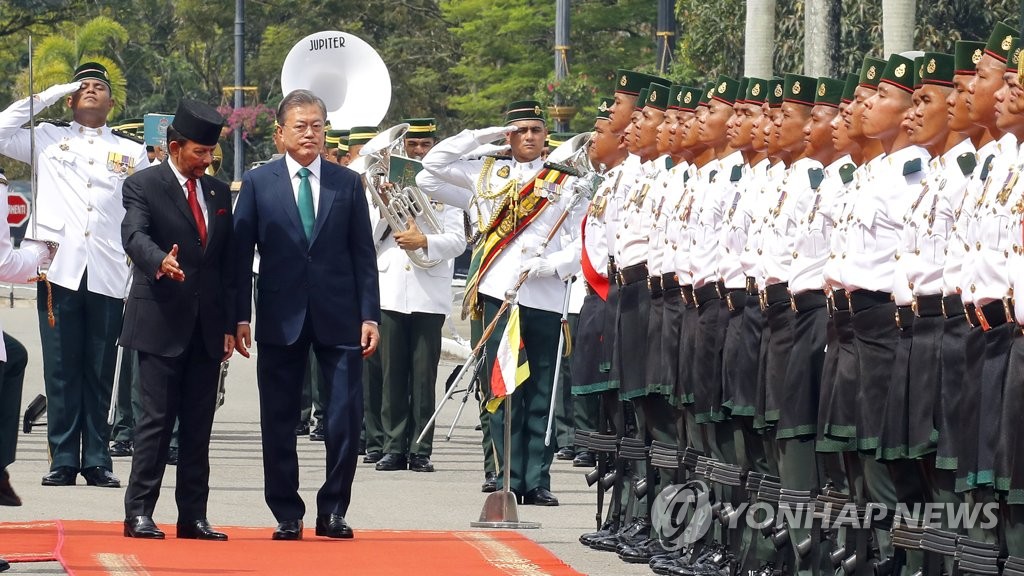 "Our two countries have developed friendly cooperation in various areas, including infrastructure, energy and people-to-people exchanges, over the 35 years since establishing diplomatic ties," Moon told the Bruneian monarch at the start of their meeting.

The South Korean leader arrived in Brunei on Sunday on a three-day state visit, becoming the first South Korean president to do so in 19 years.

Bolkiah expressed hope for increased cooperation between the countries, as well as South Korea and Association of Southeast Asian Nations (ASEAN), to which Brunei is a member.

"I believe the president's state visit has a great significance. That is because the year not only marks the 35th anniversary of the establishment of our diplomatic ties but also because Brunei is serving as the coordinator of South Korea-ASEAN dialogue," said the sultan through his interpreter, according to Cheong Wa Dae pool reports.

Moon is scheduled to host a special South Korea-ASEAN summit later in the year to mark the 30th anniversary of establishing their dialogue.

The leaders agreed to further expand the countries' cooperation in the energy sector.

They "agreed to continue their support so the countries' cooperation in building a LNG value chain spanning from gas mine development and transportation to sales will further expand," Cheong Wa Dae said in a press release.

South Korea imports over 1 million tons or about 4.3 percent of its LNG supply from Brunei annually. 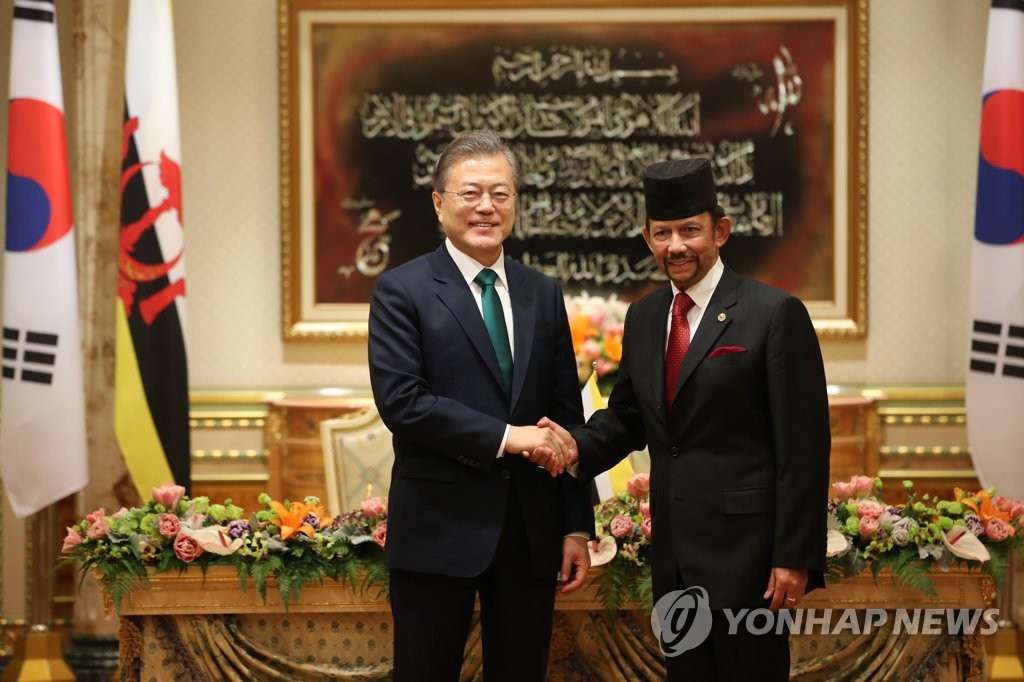 "Both leaders expressed appreciation at the long-standing cooperation in the energy field and looked forward to continuing discussions on exploring further collaborations in both the upstream and downstream oil and gas sectors, as well as re-establishing cooperation with additional areas, such as LNG value chain cooperation," they said in a joint statement released shortly after their summit.

"The leaders also looked forward to the joint capacity building activities in renewable energy that Brunei Darussalam and the Republic of Korea will implement as co-chairs of the Renewable and Alternative Power Generation Work Stream under the East Asia Summit Cooperation," the statement said.

Moon and Bolkiah also agreed to work together to promote bilateral cooperation in areas of intellectual property and science and technology while also expanding the countries' joint efforts to create new growth engines, the press release said.

To help expand the number of visitors between the two countries, the leaders also agreed to seek an increase in the number of direct flights.

The number is already set to increase to four per week from the current three next month, according to Cheong Wa Dae.

"Both Leaders emphasized the importance of people-to-people exchanges, which serve as a valuable foundation for the bilateral relations and welcomed the active engagement between students, youth, tourists, MSMEs, media and government officials," the leaders' joint statement said.

"They agreed to further enhance this cooperation, thereby strengthening mutual understanding and ties of friendship between the peoples of the two countries."

Moon's trip here came as part of a three-nation tour that will later take him to Malaysia and Cambodia, which, along with Brunei, are members of the 10-nation ASEAN.

"The two leaders agreed the special South Korea-ASEAN summit will be an important opportunity to review the South Korea-ASEAN relations over the past 30 years and seek ways to develop their relations in the future, and agreed to work closely together for the success of the summit," it added.

Moon also asked for Brunei's continued support for his country's efforts to establish permanent peace on the Korean Peninsula.

Bilateral trade between South Korea and ASEAN reached a record high of US$160 billion last year. South Korea seeks to expand the amount to $200 billion by 2020 under its New Southern Policy.

Moon has also stressed the importance of ASEAN countries in ridding North Korea of its nuclear ambitions, noting all 10 members of ASEAN have diplomatic relations with Pyongyang.