GWANGJU/SEOUL, March 11 (Yonhap) -- Former President Chun Doo-hwan appeared in a libel trial in the regional city of Gwangju on Monday over his controversial memoirs, in which he allegedly defamed victims of his brutal crackdown on a 1980 pro-democracy uprising.

The 88-year-old, who led an authoritarian government from 1980-1988, was indicted in May last year on charges that he defamed victims of his government's bloody crackdown on the Gwangju pro-democracy revolt.

It marks another court appearance by the disgraced ex-leader in more than two decades after he stood a criminal trial on treason and other charges in 1997. His wife and former first lady, Lee Soon-ja, accompanied him.

In the book, published in early 2017, Chun refuted a testimony by late activist priest, Cho Chul-hyun, and called him "Satan wearing a mask."

The priest had claimed that he witnessed the military firing at citizens from helicopters during the bloody suppression of the protests against Chun's rule. Chun has insisted that Cho lied.

When asked by a reporter at the Gwangju court if he still denies he ordered the firing, Chun, clad in a dark suit and a yellow tie, said, "What do you think you're doing?" 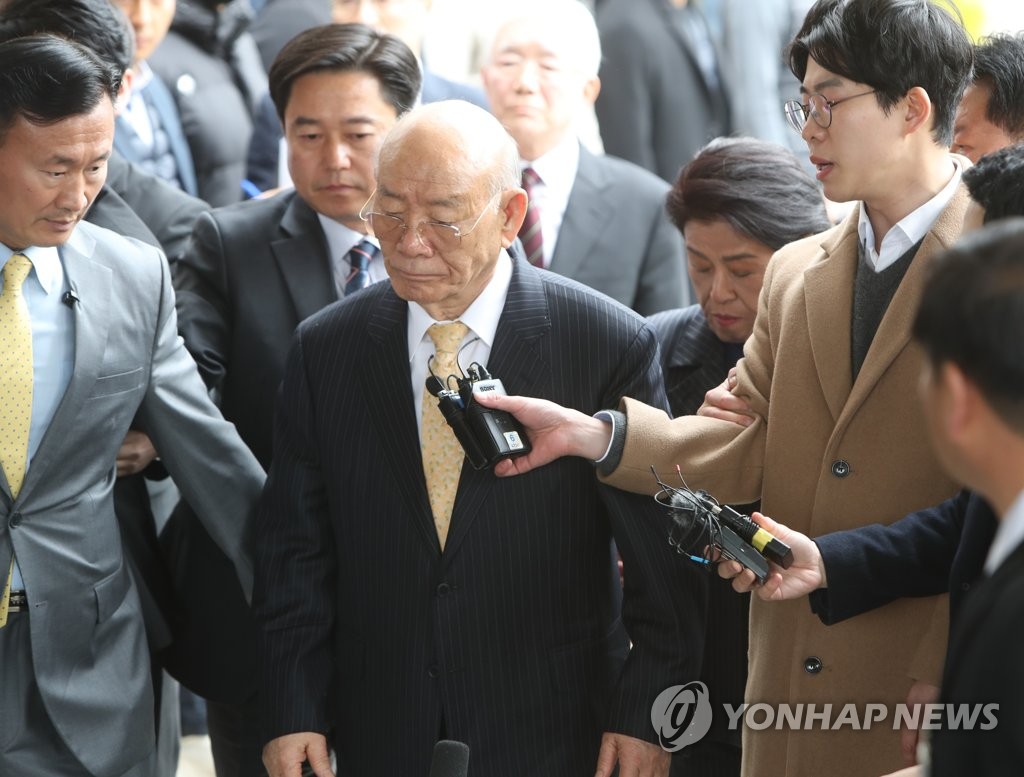 On May 18, 1980, the brutal crackdown on student-led demonstrations against Chun's junta sparked a massive civilian protest in Gwangju. When the troops fired into crowds, it is said protesters began to arm themselves. According to an official tally, the bloodshed led to the deaths of around 200 people and 1,000 injured.

Prosecutors began an investigation after Cho Young-dae, Cho's nephew, filed a complaint. If convicted, Chun could face up to two years in prison or up to 5 million won (US$4,400) in fines.

The Gwangju District Court has issued a subpoena against Chun after he repeatedly refused to come to the hearing, citing health conditions that include a claim he suffers from Alzheimer's disease.

His lawyer has said the former president has no intention of evading the court proceedings.

Ahead of Monday's court hearing, Cho Young-dae, also a Catholic priest, called for the former president to admit to his wrongdoing "at least for once."

"He must say something, that he admits his guilt," he told reporters. "I hope this historic moment will be the beginning of finding the truth. ... And this is the chance (for Chun) to repent for his sin. I pray he doesn't stir the ire of Gwangju citizens by telling lies."

How to define the Gwangju uprising remains a deeply divided issue in South Korea and is often a subject of ideological confrontation between conservatives and liberals.

Last month, the main opposition Liberty Korea Party expelled one of its lawmakers for making disparaging remarks about the Gwangju incident as being a riot that had involved North Korean troops.

A series of truth-finding probes have been conducted regarding the Gwangju uprising, with the latest announced in October last year that found there were at least 17 suspected cases of sexual violence committed by soldiers on dozens of women.

Chun has never admitted responsibility or apologized for the revolt.