(ATTN: UPDATES with passage of bill at parliament committee in 4th para)

SEOUL, March 11 (Yonhap) -- Rival parties are speeding up deliberation on various bills on fighting fine dust pollution, with a goal of passing at least seven of them in a plenary session of the National Assembly this week, officials said Monday. 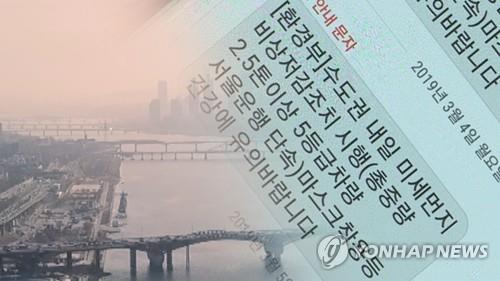 In the first seven days of March, most of South Korea, including Seoul, was hit by heavy concentrations of ultrafine particles that were about six times higher than the maximum density recommended by the World Health Organization.

The National Assembly's Public Administration and Security Committee approved a bill for the partial revision of the Framework Act on the Management of Disasters and Safety on Monday morning, which calls for designating fine dust pollution as a "social disaster."

If fine dust is classified as a disaster by law, the government will be able to allocate the national budget, including its reserve funds, to cope with damage from the concentration of ultrafine particles and other air pollutants.

The Environment and Labor Committee will also hold its plenary meeting on the day to handle a revision of the Indoor Air Quality Control Act calling for a mandatory monitoring network of fine dust at public use facilities, as well as a revision of the Clean Air Conservation Act intended to ban the modification of automobile exhaust gas-related parts, officials said.

The committee will also deliberate on a special law that will expand the scope of air control to cover the whole nation and regulate emissions of air pollutants at industrial facilities, they said.

The Education Committee plans to pass a revision of the School Health Act that obliges all schools to monitor fine dust and install air purifiers.

Lawmakers of the Trade, Industry, Energy, SMEs and Startups Committee also will hold a debate on whether to partially or entirely ease the current regulation of the use of liquefied petroleum gas.