SEJONG, March 11 (Yonhap) -- The government said Monday that it is considering extending a temporary tax deduction for credit card use in a move to ease public concerns over possible benefit cuts.

Currently, the law permits credit card holders to deduct 15 percent of their credit card charges up to 3 million won (US$2,600) for those who earn 70 million won or less a year.

The scheme had been scheduled to end by the end of this year, but the plan has touched off strong protest as it has become one of the biggest tax refunds households get back every year.

The Ministry of Economy and Finance denied allegations that the government either planned to scale back or abolish the tax deduction on credit card use for the purpose of a tax hike or to revitalize the "Zero Pay" service launched by the Seoul Metropolitan Government.

Zero Pay, a new smartphone-based payment service, is a mobile direct transaction system in which money is transferred from a consumer account to a merchant account when the consumer scans the merchant's QR code with a smartphone using the existing apps of commercial banks and online payment platforms, such as Naver Pay and Payco. 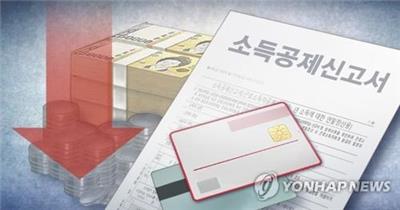