SEOUL, March 12 (Yonhap) -- Preseason baseball is about trying new things and making adjustments as necessary, as teams prepare for the real action.

In the Korea Baseball Organization (KBO) this season, Kiwoom Heroes manager Jang Jung-suk is taking his tinkering ways to a new level. 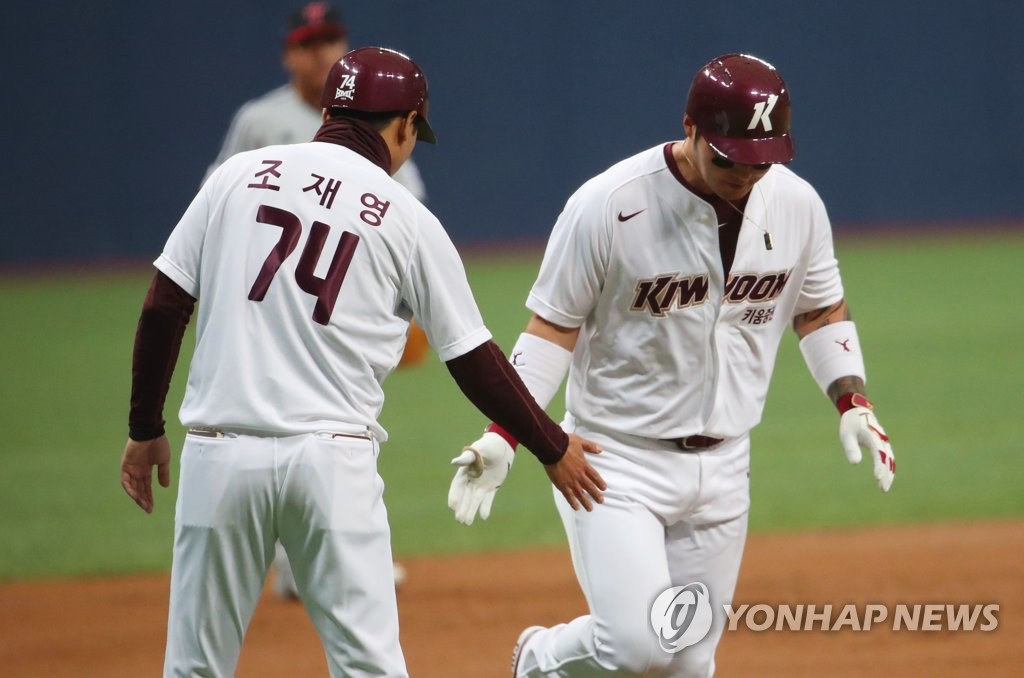 The KBO's preseason began across the nation on Tuesday with all 10 clubs in action. The Heroes are hosting the LG Twins at Gocheok Sky Dome on Tueday and Wednesday, with each team set to play eight games before the start of the regular season on March 23.

For the preseason opener, Jang placed Park Byung-ho, one of the KBO's most feared sluggers, in the No. 2 spot in the lineup.

Putting the team's best hitter, or the most dangerous slugger, in the No. 2 spot is hardly new. In Major League Baseball (MLB), Mike Trout, Josh Donaldson, Kris Bryant and Giancarlo Stanton, all former MVPs in their respective leagues, have batted second.

Though a few KBO teams caught wind of the trend and tried moving some boppers up in the order, no change has been quite as drastic as Park's move to the No. 2 spot.

"The Book: Playing the Percentages in Baseball," a groundbreaking book on statistical analysis of the sport, noted the No. 2 hitter comes to bat in situations as important as the No. 3 hitter does but does so more often. Statistically, it makes sense to give the best hitters more opportunities in key situations. 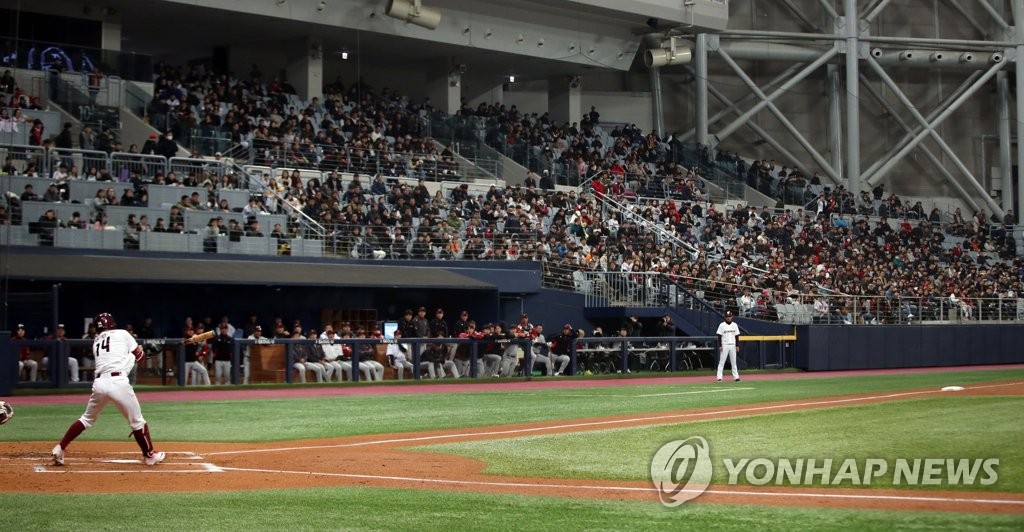 Still, Park is as far removed from the conventional mold of a No. 2 hitter as anyone you can find in this league. He is the only KBO player with back-to-back 50-homer seasons, after surpassing the half-century mark in 2014 and 2015. The two-time KBO MVP spent 2016 and 2017 in the Minnesota Twins oragnization, and rejoined the Heroes last season, when he belted out 43 homers in 113 games.

Jang said he spoke with Park before the start of spring training, and he and his staff have done enough statistical analysis to feel comfortable Park could be a good fit there. And the manager has the luxury of a talented lineup that combines power and contact ability.

"During the preseason, we're going to move him up and down between the No. 2 and No. 3 spots," Jang told reporters before the Heroes hosted the LG Twins in preseason at Gocheok Sky Dome in Seoul. "He's been our cleanup hitter for so long, and this is in part designed to lift some pressure off of him."

Park batted cleanup in all but four of his 483 plate appearances. He's had pinch-hit appearances in the seventh and eighth spots.

With Park batting second, Jerry Sands, who mostly batted fifth last year, moved up to third, and the usual No. 2 hitter, Seo Geon-chang, hit in the cleanup spot. The 2014 KBO MVP is a prototypical slap hitter with a .317 lifetime batting average but just 24 career homers in 743 games.

Jang said he is more than happy to have Seo bat cleanup. 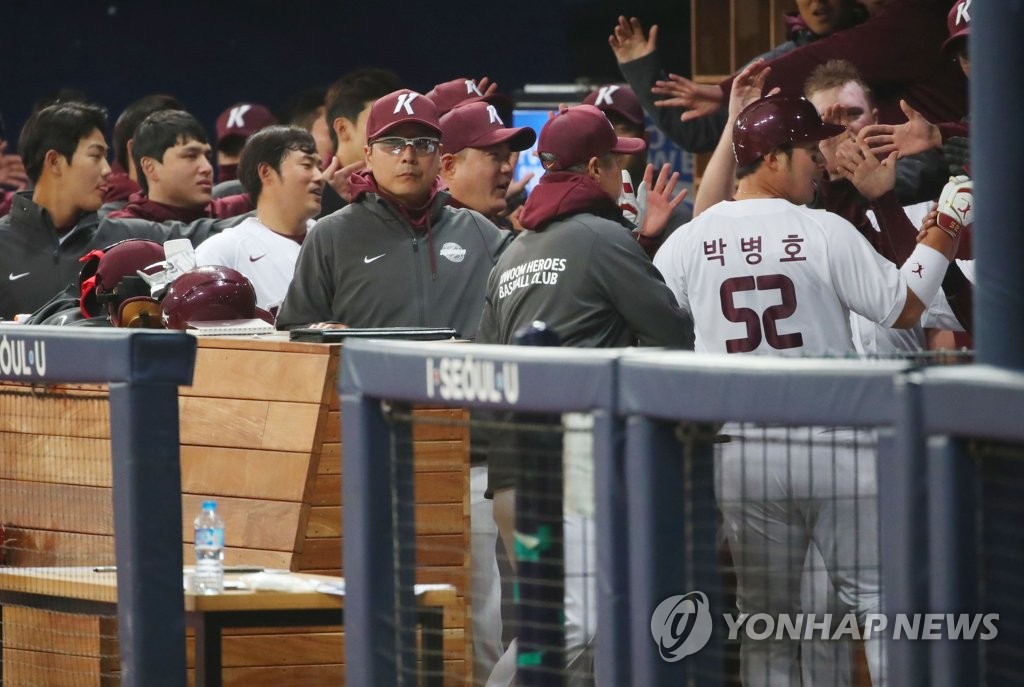 "Other than the fact that he's not a slugger, Seo Geon-chang can do it all at the plate," the manager said. "He's always hit well with runners in scoring position."

Jang acknowledged that Park, who has driven in at least 100 runs in five straight seasons, may see his total dip as a regular No. 2 hitter because he will be batting without a runner on base more often than not. And that puts the onus on the hitters at the bottom of the order to reach base and set the table for the big bat.

"In the past, we used to just stick our catcher in the No. 9 spot," Jang said. "This year, we'll have to look into numbers and go with someone with a high on-base percentage."

Jang's move paid immediate dividends Tuesday. Park homered in his first at-bat off Tyler Wilson, and went 2-for-2 with an RBI and two runs scored, as the Heroes took the game 4-1.

Park said after the game that he had no misgivings about serving as the new No. 2 hitter.

"Our manager has the final say in these things, and as professional ballplayers, we have to prepare ourselves accordingly," he said. "I heard a typical No. 2 hitter gets 30 more plate appearances than a cleanup hitter in a season. I am going to have to make the most of those extra opportunities."

As for his first inning home run, Park said, "I wanted to be aggressive from the start. Hopefully, this will be a sign of good things to come this season."

And whatever changes can make the Heroes better, Park is all for it.

"I think we're the only team that can go ahead with such a bold change to the batting order," Park added. "I think it's great that we're not afraid of change."