(ATTN: UPDATES with reports of a joint press conference by the leaders, minor edits in paras 16-21)
By Byun Duk-kun

PHNOM PENH, March 15 (Yonhap) -- The leaders of South Korea and Cambodia agreed Friday to expand the countries' economic cooperation while also vowing joint efforts to establish peace on the Korean Peninsula and in the region. 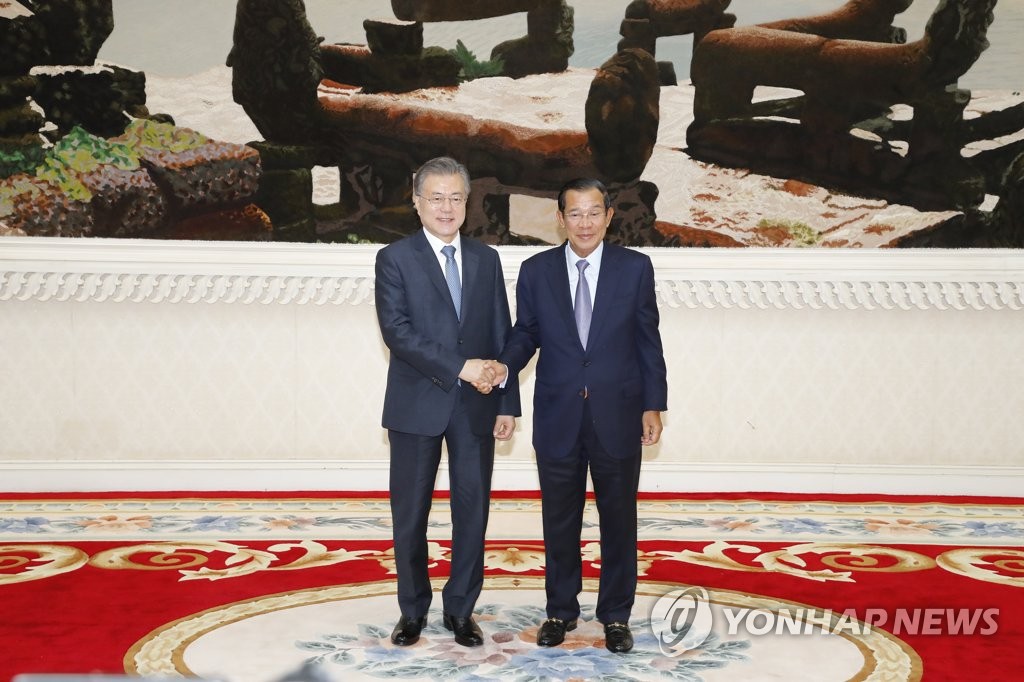 "President Moon expressed his determination to further develop the close cooperative relations between the countries that have improved since the countries reestablished their diplomatic ties in 1997 into a more mature relationship of coexistence under the New Southern Policy," Moon's presidential office Cheong Wa Dae said.

Moon arrived here Thursday on a three-day state visit, becoming the first South Korean leader to do so in a decade.

South Korea and Cambodia initially established diplomatic ties in 1970, but their relations were severed in 1975 when Cambodia was communized.

Moon insisted there was much more room for increased cooperation between the two countries.

"I believe the countries' relationship has great potential to grow more rapidly in the future," he said at the start of his summit talks with Hun Sen, according to Cheong Wa Dae pool reports.

The Cambodian leader too expressed hope for improved relations.

"I believe we will be able to further strengthen the relationship between our two countries through President Moon Jae-in's visit and also expand the scope of cooperation between the two countries," he told Moon through his interpreter.

"I believe we may be able to push for a strategic partnership bilaterally and in multilateral settings," Hun Sen added.

The summit followed a welcome ceremony for Moon hosted by King Norodom Sihamoni. 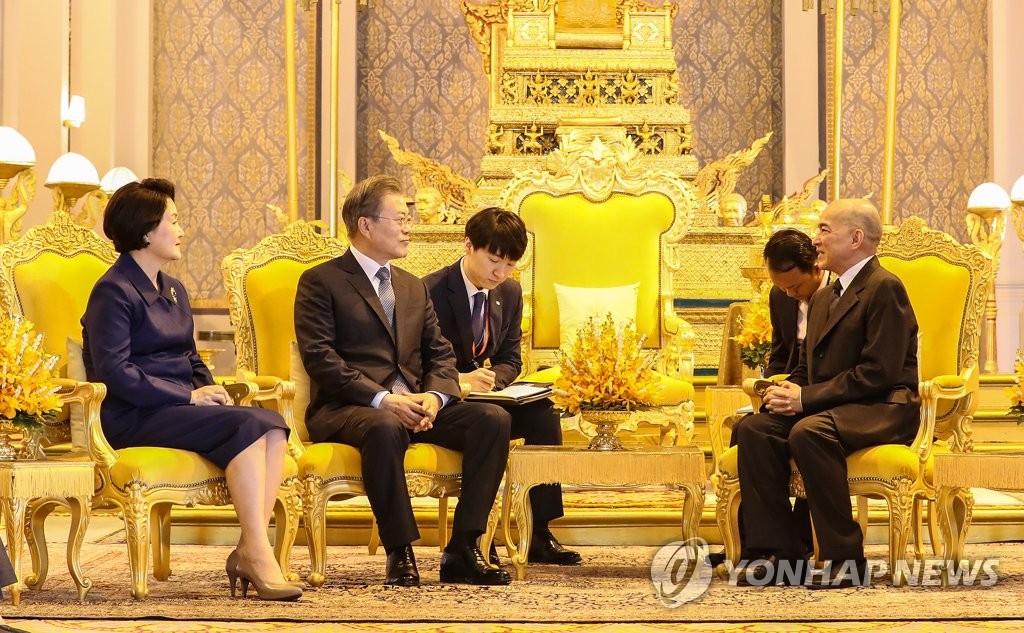 The New Southern Policy is one of Moon's key foreign policy initiatives aimed at boosting South Korea's economic and diplomatic relations with the ASEAN and India.

Moon is currently on a three-nation trip that earlier took him to Brunei and Malaysia, both members of ASEAN.

Seoul is also set to host a special South Korea-ASEAN summit later in the year to commemorate the 30th anniversary of the establishment of dialogue relations between South Korea and the 10-member ASEAN.

In a joint press conference held shortly after their summit, Moon stressed the importance of people-to-people exchanges.

"First, we two leaders agreed to work to further enhance the friendship of our two peoples," Moon said, noting some 50,000 Cambodians currently live in South Korea with nearly 400,000 South Koreans vacationing in Cambodia each year.

Efforts to boost people-to-people exchanges will require better protection of people visiting each country, he noted.

"I especially evaluate the conclusion of negotiations this time for a mutual legal assistance treaty, creating the institutional foundation for cooperation," Moon told the press conference.

Shortly after their summit, the leaders attended a signing ceremony where four other memorandums of understanding (MOUs) were signed, including an MOU on academic exchanges that seeks to identify and promote bilateral cooperation in 12 different areas, ranging from agriculture and transportation to construction and financial technology.

Also on bilateral cooperation, Moon and Hun Sen vowed efforts to expand their countries' cooperation in agriculture, infrastructure, manufacturing and financial sectors, while calling for efforts to quickly conclude their negotiations on a tax treaty to help promote investment.

He also reaffirmed his support for Seoul's efforts to peacefully denuclearize the Korean Peninsula.