SEOUL, March 15 (Yonhap) -- One in four young South Korean students has a problem with obesity, the Ministry of Education said Friday, calling for increased efforts to improve the health of young people.

The ministry released data on student obesity as Education Minister Yoo Eun-hae presided over a meeting of Cabinet ministers in charge of social affairs to discuss ways to improve the physical and mental health of young students.

According to the data compiled from a survey of 108,000 elementary, middle and high school students conducted nationwide last year, 25 percent had health problems linked to obesity. It found 10.6 percent of them were overweight and the remaining 14.4 percent obese. 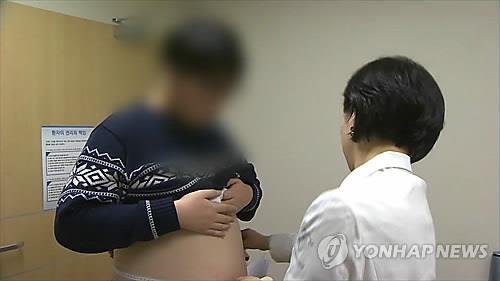 The portion of students with obesity problems stood at 21.8 percent in a similar survey conducted in 2014.

In a separate survey, 53.7 percent of the young students had a visual acuity of 0.7 or less, a level considered abnormal, ministry officials said. About 23 percent of students had more than one tooth cavity.

Based on the results of the recent surveys, the government will focus its policy efforts on strengthening health education at schools, expanding health services, creating healthy education environments and expanding health-related support, education ministry officials said.

Obese students, for instance, will have their metabolic syndrome test results and obesity prevention programs will be distributed to schools. Air purifiers will be installed in all elementary and secondary schools across the nation this year to help create a healthy education environment, they said.

One in four Korean students found to have obesity problems

One in four Korean students found to have obesity problems