SEOUL, March 15 (Yonhap) -- The government will increase the nation's unemployment benefit payouts by more than 16 percent in the second half of the year, the Ministry of Employment and Labor said Friday.

The ministry said it will raise the amount and duration of unemployment benefits starting in July, increasing the average payout per person to 8.98 million won (US$7,913) from the current 7.72 million won.

"The payment period of unemployment benefits will be lengthened by 30 to 60 days, and the amount of payout will rise from 50 percent of the average income to 60 percent," the ministry said in a policy report to the National Assembly. 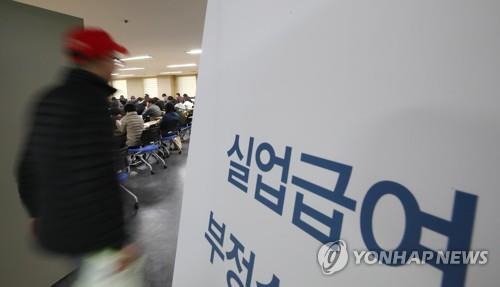 "Under the changed policy, a single unemployed person is expected to get 8.98 million won for 156 days on average. At present, the average person receives 7.72 million won for 127 days," it said, putting the increase rate at 16.3 percent.

It will be the first time since the unemployment insurance was introduced in 1995 that the government increases the amount and duration of the jobless benefits.

Meanwhile, the ministry said it has finalized a plan to pay an "employment promotion allowance" to jobseekers in low-income households who are not covered by the unemployment insurance.

The government is to pay a monthly employment promotion allowance of 500,000 won to jobless members of households earning less than 50 percent of the median income for six months, starting next year, the ministry noted.

Unlike the unemployment insurance benefits, the employment promotion allowance will be drawn from the government's coffers.

South Korea's jobless rate rose to 4.7 percent in February despite the increased pace of hiring, government data showed Wednesday, in the latest sign of an economic slowdown in Asia's fourth-largest economy.

The unemployment rate marked the highest level for any February since 2017, when the corresponding figure stood at 4.9 percent, according to Statistics Korea.