Recent media reports and U.S. think tank analyses on activities at the North's west coast Dongchang-ri launch site and the Sanumdong missile research center near Pyongyang have fueled the speculation about a possible missile or satellite launch.

"Describing them missile-related activities is a hasty judgment," Jeong said during a session of the National Assembly's defense committee. "Though Dongchang-ri is a launch site, we don't judge them as activities in preparation for a missile launch." 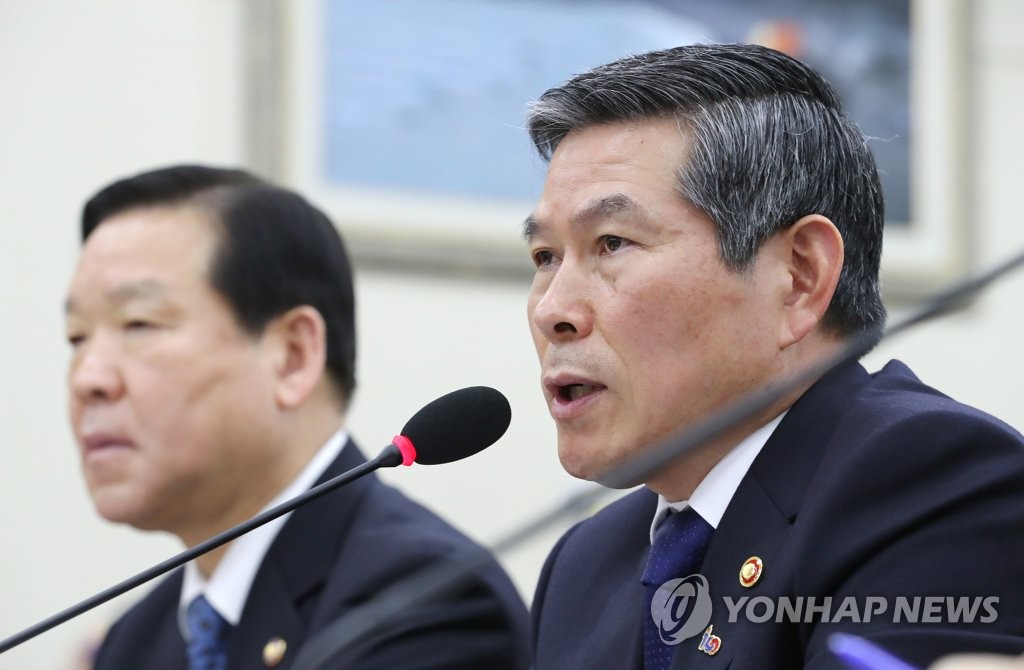 The communist regime has been seen rebuilding the Dongchang-ri missile launch facility it partially dismantled last year. Some analysts said that it might be a negotiation tactic following the breakup of the second summit between U.S. President Donald Trump and North Korean leader Kim Jong-un in Hanoi last month.

The latest Trump-Kim summit ended without a deal, as the two sides played hardball over the scope of Pyongyang's denuclearization and Washington's sanctions relief.

On the possibility of the North resuming its missile or nuclear tests, Foreign Minister Kang Kyung-wha said that the Seoul government is closely watching the situation while "leaving all possibilities open."

"Our government is also much concerned," she told a session of the parliamentary committee on foreign affairs and unification. "We have been sending a message that we hope the North will make a wise judgment."

Asked if the North has been conducting any nuclear activity, the defense minister gave a cryptic answer.

"We are grasping all such activity," he said.

Reports raised skepticism over Pyongyang's willingness to denuclearize, saying that it has been producing enough ingredients for several nuclear bombs even during negotiations with Washington.

Referring to the reports, Jeong said that the intelligence authorities of the South and the U.S. are closely cooperating on the matter.

"We cannot confirm whether each foreign news report on (how many nuclear bombs North Korea) has produced is right or not," he said.

The North's reported nuclear and missile activities have cast a pall over the prospects of ongoing diplomacy for its nuclear disarmament and raised questions over the efficacy of Seoul's intermediary role between Pyongyang and Washington.