SEOUL, March 19 (Yonhap) -- South Korea's dependence on key products for exports was nearly double that of major exporters in 2018 due mainly to its prowess in the chip industry, a report said Tuesday.

The country's "product concentration of exports" stood at a 20-year high of 137.2 last year, 1.8 times the average of 77.9 for the world's 10 largest exporting countries, according to the report by the Korea Economic Research Institute (KERI).

The index measures how a country's overseas shipments are concentrated on a small number of items, according to KERI, which is affiliated with the Federation of Korean Industries, the lobby for family-controlled conglomerates.

KERI attributed South Korea's high concentration to the country's chip technology superiority, its failure to nurture new growth engines and the sluggishness of other manufacturing industries. 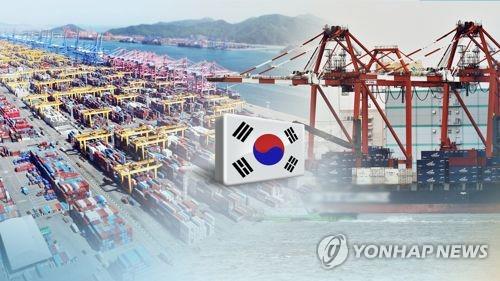 "South Korea's export product concentration has grown over the past two years due to a spike in semiconductor exports," the report said.

It also expressed concerns over the impact of slumping chip exports, which stem from weaker demand and tumbling prices, on the South Korean economy.

In a recent report, the World Semiconductor Trade Statistics (WSTS) organization projected the global chip market to contract 3.3 percent on-year in 2019, with the memory chip segment likely to suffer a 14.2 percent tumble.

"There is a high possibility of the WSTS forecast becoming a reality in light of tumbles in South Korea's chip exports," said Lee Tae-gyu, a KERI researcher.

A 10 percent contraction in growth of the memory chip sector could lead to a drop of up to 20 trillion won (US$17.7 billion) in induced production and an employment loss of more than 50,000, Lee added.

In February, South Korea's chip exports tumbled 24.8 percent on-year to $6.7 billion. The country shipped $7.42 billion worth of chips in January, down 23.3 percent from a year earlier.

Noting that high product concentration can increase the risk of falling exports, the report called for efforts to boost the competitiveness of key export industries and secure new growth engines.