In a weekly Cabinet meeting held at his office Cheong Wa Dae, the president singled out the manufacturing industry as being most in need of support.

"Amid gloomy outlooks for the global economy this year, our economy too is strongly affected. It is a relief that our economy is showing signs of improvement in various aspects despite such difficulties," the president told the meeting, according to Cheong Wa Dae pool reports. 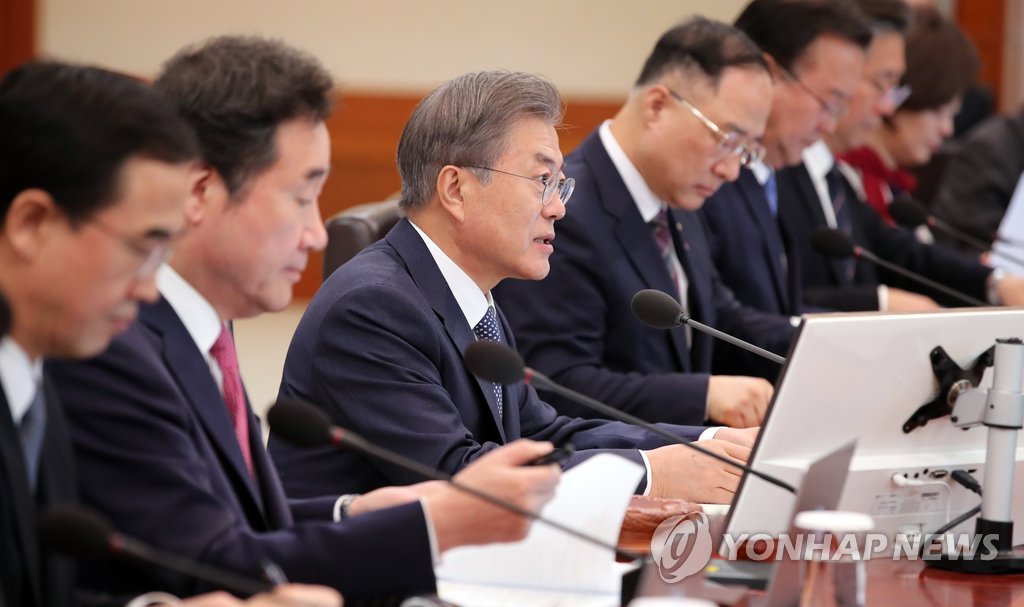 The president cited the recent increase in both output and spending as signs of improvement, also noting the country added 263,000 jobs from a year earlier in February, the largest on-year increase since January 2018.

"But the manufacturing sector that is the foundation of our national economy is still facing difficulties," he added.

Moon insisted the government was doing its utmost to support the manufacturing industry, but that such efforts may not yet be strong enough for local businesses and their workers to appreciate.

"Revitalizing the manufacturing sector is the way to revive our economy," he added.

The president asked government ministries to review their own support measures introduced earlier to make sure they are in fact helping local companies.

For instance, the president stressed the need to further promote the sales of electric and fuel cell vehicles to help local carmakers and their suppliers.

He also called for additional efforts to develop non-memory semiconductors to boost the overall global competitiveness of the country's chipmakers.

"I ask you to help ensure balanced development of both conventional manufacturing industries and new, innovative industries," the president said.

Tuesday's meeting marked the first of its kind since Moon returned home from his weeklong trip to three Association of Southeast Asian Nations (ASEAN) member countries.

The president insisted working with ASEAN members and other Asian neighbors was a must.

"Brunei, Malaysia and Cambodia are all very important cooperation partners of our New Southern Policy. The New Southern Policy is the core of our country's national development strategy. Diversifying the country's diplomatic and economic partners is not a matter of choice but an essential requirement," he said.

Moon is already set to host a special South Korea-ASEAN summit, involving the heads of all 10 ASEAN member countries later in the year.

"ASEAN is growing at a faster rate than any other region in the world and also has a great potential for growth. In that sense, we may say our future lies in ASEAN. We must start the future of peace and joint prosperity in Asia together with ASEAN," the president said.

The ASEAN countries make up South Korea's second-largest trading partner, with their trade reaching a record high of US$160 billion in 2018.

Moon seeks to boost the amount to $200 billion by 2020 under his New Southern Policy.