Park and her husband identified only by his surname Yoo have come under fire for playing golf a few years ago together with a high-ranking police official who is now under a police probe for his potential collusion with some nightclub owners and K-pop singers and his wife.

The police official is suspected of turning a blind eye to various crimes allegedly committed by the clubs and the stars in return for lavish treatment and cash.

Yoo is the head of Yuri Holdings that has a large stake in the operator of Burning Sun, a club in southern Seoul where illegal drug use and sexual violence are alleged to have frequently occurred. His business partner Seungri, a member of popular boy group BIGBANG, was a public relations director of the club.

"I'm really sorry for causing troubles to so many people recently for things related to my husband," Park said on Instagram. 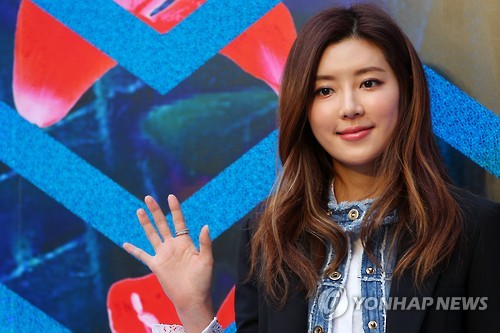 "I thought that I cannot separate myself from the past of someone with whom I will spend the rest of my life with, but I was tremendously careful to talk about an issue that is under an investigation."

The star then said she feels a sense of responsibility for the growing scandal and said whatever the result of the probe is, she will take it as a process to lead her family down the right path.

Park, however, said she will not pull herself from a major role in the ongoing MBC TV drama series "Love In Sadness" despite the scandal.

"The reason why I am trying to press ahead with the filming of the drama despite the scandal is because it's a promise to so many people, as well as the production company, broadcaster and my management agency," Park said. "I'll do my best because the drama is in its final stage of shooting, and it's my duty not to break the flow of the story."