The epicenter of the quake was located 41.31 degrees north latitude and 129.08 degrees east longitude, and is about 1 kilometer away from the site of North Korea's sixth nuclear test site in Punggyeri, the KMA said, estimating its depth at 10 km.

But the agency said the tremor was presumed to be a natural and induced quake, noting the presumption was reached through a joint analysis with the state-run Korea Institute of Geoscience and Mineral Resources.

An induced earthquake is a type of natural earthquake that is caused by a deformation of the crust over time due to human activity.

The North carried out its sixth and most powerful nuclear test at the Punggyeri site in September 2017, causing several induced quakes in Kilju thereafter.

The Pyongyang regime demolished the Punggyeri site in the presence of foreign journalists in May last year, as part of its denuclearization pledge. 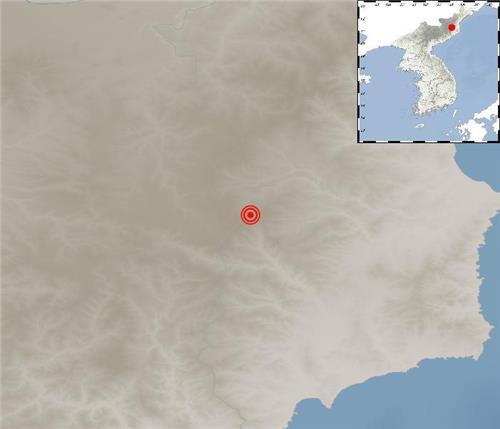 The KMA also said that another earthquake measuring 2.7 magnitude occurred in waters off North Korea's western port of Ongjin at 7:13 a.m. Thursday.

The epicenter of the quake was located 37.56 degrees north latitude and 125.20 degrees east longitude, and is about 43 km southwest of Ongjin, it added, estimating it as a natural quake too.