(ATTN: ADDS reactions from Yeosu community in para 13-15; UPDATES with minor edits throughout)
By Kim Seung-yeon

SEOUL, March 21 (Yonhap) -- The Supreme Court on Thursday approved a retrial of three civilians who were executed for siding with anti-government insurgents in a political bloodshed more than 70 years ago.

The 13-judge panel, led by Supreme Court Chief Justice Kim Myeong-su, upheld the bids by surviving families of the victims, including one surnamed Chang.

Chang and the others, who were living in the southern city of Suncheon, were arrested and sentenced to death in 1948 for helping the rebel soldiers during what is known as the Yeosu-Suncheon uprising. They were executed 22 days later.

Their families filed the request for retrial in 2013, claiming they were convicted and executed without due process.

On Oct. 19, 1948, some 2,000 left-leaning soldiers in the 14th regiment of Yeosu, a port city near Suncheon, rose up in arms against the U.S.-backed government of Rhee Syng-man and the U.S. influence on the Korean Peninsula.

They resisted the Army's decision to transfer them to the southern island of Jeju to suppress an anti-government protest.

The protest in Yeosu grew into a bloody clash between the Rhee government forces and the protesters who were joined by civilian sympathizers from the surrounding regions.

In the post World War II period, Korea was divided into two entities -- a southern part of the peninsula administered by the United States and a northern part by the Soviet Union -- which set the stage for fresh political turbulence between communists and capitalists.

Rhee declared martial law on Yeosu and Suncheon, and the military, with the help of U.S. commanders, went on a ruthless hunt to quell the rebel forces. The uprising was mostly contained by November of that year.

The government-led Truth and Reconciliation Commission concluded in its 2009 inquiry that the Rhee government wrongfully charged and killed between 438 and 2,000 innocent civilians in the Yeosu incident.

The lower courts upheld the plaintiffs' requests, acknowledging that the victims had been convicted without probable cause or sufficient evidence through a fair trial.

The top court on Thursday agreed with these rulings.

"The government has officially recognized the massacre by state-led violence," Lee Young-il, chief of a Yeonsu-based think tank, told Yonhap. "I hope this will give a boost to the push for special legislation on the Yeosu uprising."

Jeon Chang-gon, the representative for the Yeosu incident with Yeosu City Council, vowed efforts to get a petition with at least 10,000 signatories for the special bill.

The revolt left high numbers of civilian casualties, with estimates of up to 10,000 believed to have been killed or injured during the bloodshed. 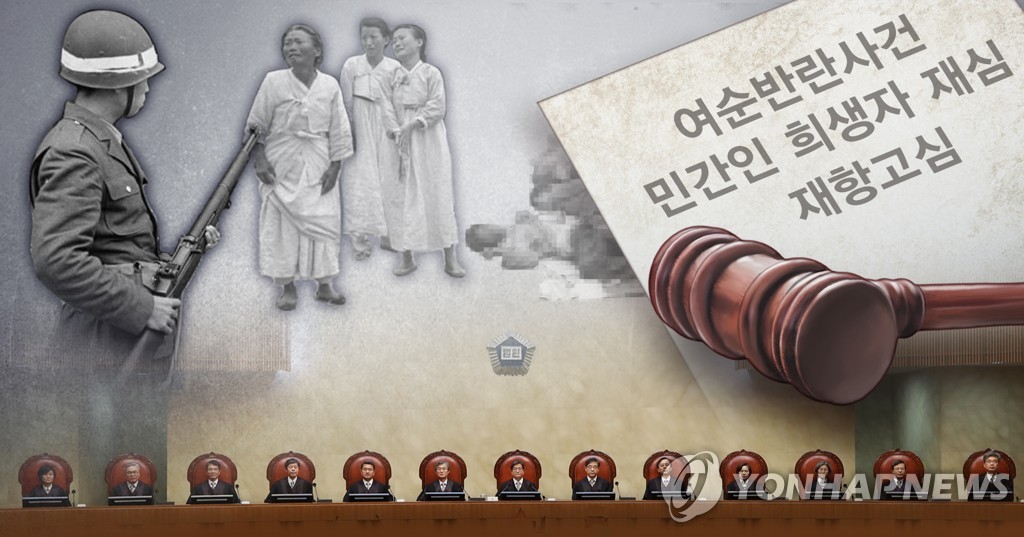