SEOUL, March 21 (Yonhap) -- South Korea's finance minister on Thursday sounded a cautious note on whether to draw up an extra budget amid an economic slowdown.

Hong Nam-ki said in a parliamentary session that the government is taking into account various economic factors in making a decision on the issue.

He told lawmakers that the government needs about 3 trillion won (US$2.6 billion) to finance a basic pension program for the elderly.

The government is set to increase the basic pension to 300,000 won per month for old people, except for those in the upper 30 percent income bracket, in the second half of this year.

The finance minister's comments came more than a week after a team from the International Monetary Fund said a supplementary budget should amount to 0.5 percent of South Korea's gross domestic product, which stood at 1,800 trillion won last year.

Also Thursday, Hong told lawmakers that he disagrees with the notion that South Korea is facing the "worst" ever economic situation, though he acknowledged that the economy is in a difficult situation.

Hong said the South Korean economy grew 2.7 percent in 2018, which he said is not really low compared with that of the Organization for Economic Cooperation and Development, a group of 36 mostly rich nations.

Some economic indices show signs of difficult economic situations, but others suggest movement towards improvement, the policymaker pointed out, without elaborating.

South Korea's jobless rate rose to 4.7 percent in February, the highest level for any February since 2017, when the corresponding figure stood at 4.9 percent, according to Statistics Korea.

Still, the South Korean economy added 263,000 jobs last month from a year earlier, the biggest since January 2018, when employers hired some 334,000 workers. 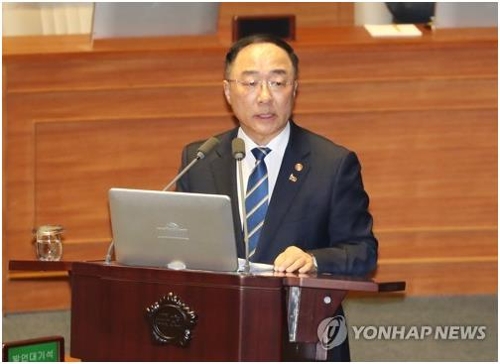