USCGC Bertholf (WMSL-750), a Legend-class maritime security cutter, is scheduled to arrive at a military-civilian port on Jeju Island on Monday largely for "goodwill" activities organized by South Korea's Coast Guard, according to the source.

The two sides also plan to conduct a joint exercise on ship inspection. 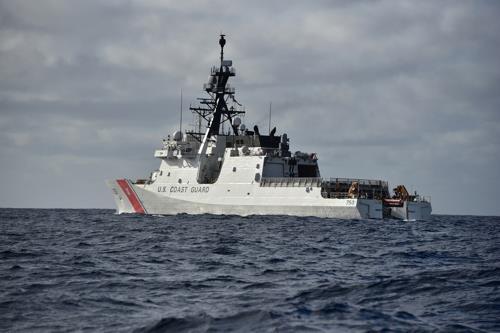 The 4,500-ton Bertholf left its homeport of Alameda, California, with its crew of 170, in January for deployment in the Western Pacific.

After reaching Sasebo in Japan's Nagasaki Prefecture in early March, it patrolled the East China Sea, keeping a lookout for illicit ship-to-ship transfers of fuel and goods by North Korea.

"The Bertholf's patrol is a part of the United States' ongoing contribution to international efforts in combating North Korea's maritime sanctions evasion activities. Ship-to-ship transfers of fuel and goods, like coal, going to and from North Korea are prohibited under UNSCRs," the U.S. Indo-Pacific Command said in a statement. UNSCRs is the acronym for United Nations Security Council Resolutions.

It has not been announced whether the Bertholf had interrupted any illicit transfers.

U.S. Coast Guard ship due at Jeju port next week

U.S. Coast Guard ship due at Jeju port next week