The president said the move will also help enhance global competitiveness of the country's manufacturing industry.

"The robot industry is a chance for Daegu and a chance for the Republic of Korea," Moon said in a meeting with officials and business leaders in the city located some 300 kilometers southeast of Seoul.

The meeting came as part of trips taken by the president to help revitalize regional economies. Friday's meeting marked the seventh of its kind attended by Moon so far, and the fourth this year.

Moon said the robot industry itself will offer many new jobs and opportunities.

"Robots are a key technology in the fourth industrial revolution. It is a key new industry that is expected to generate high-value added businesses in the future," the president said, adding the global market for robots was expected to grow to US$130 billion in 2023 from $33.5 billion in 2017. 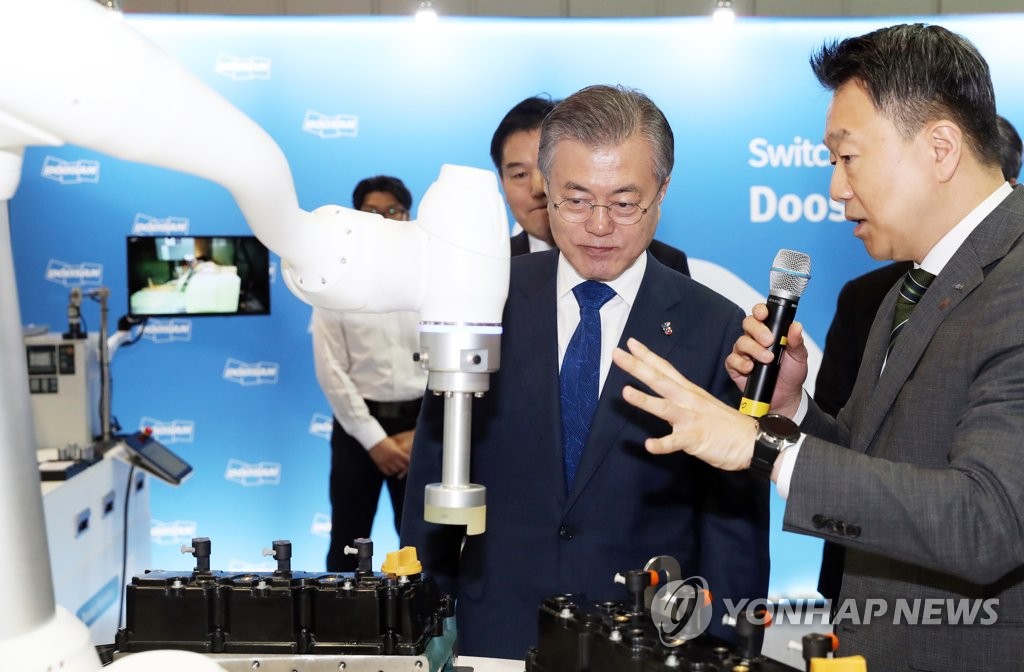 He noted the country was already a global leader with the highest robot density of 710 robots per 10,000 workers in the manufacturing sector.

"In other words, we are the country that uses the largest number of robots in the manufacturing sector," said Moon.

The president emphasized the need to develop advanced robots and in other industrial sectors to maintain the country's global leadership.

"Just like the fourth industrial revolution, the robot industry is unexplored territory. That is why we must carefully design our direction from the start and enhance its usefulness to make sure the industry will help improve our lives," he said.

To this end, Moon stressed the need to make sure robots will assist workers and not just replace them.

"Already, manufacturing robots are contributing to enhancing productivity through automatization of the process. A rise in productivity leads to an increase in sales, which in turn creates a virtuous circle of creating more jobs," he said.

Moon said the government will seek to boost the use of robots in high-risk, labor-intensive workplaces.

Also, the government will work to develop new robots that can help the people in various other ways.

"When service robots are commercialized and begin to play various roles, such as providing medical treatment, helping rehabilitation and responding to disasters, all people, including the socially weak, will enjoy a safe and comfortable life," he said.

Meanwhile, Moon said that he will make efforts to ensure that the issue of relocating an airport in Daegu will be smoothly settled. Residents have demanded the relocation, complaining of development restrictions, aircraft noise and other issues.

"(I) am well aware of the Daegu airport relocation issue," he was quoted by his spokesperson as saying.