"Andrew and I told Chung the alliance between South Korea and the U.S. is more important than ever in order to maintain the momentum for the denuclearization negotiations with North Korea. We also stressed South Korea's role in persuading North Korea to denuclearize," Shin said. 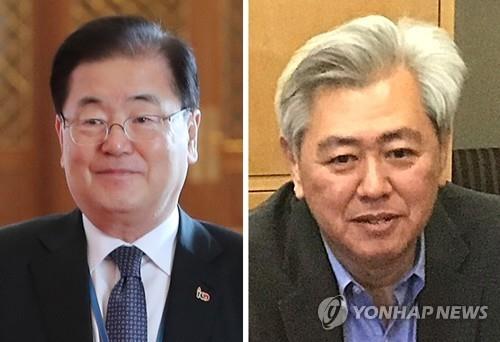 Shin did not offer more details on the meeting, only saying he and Kim delivered their opinions and Chung carefully listened and explained his government's positions.

Officials at Cheong Wa Dae confirmed Chung's meeting with the two scholars but declined to comment on details.

The meeting drew attention, as the Moon administration has vowed to push to resume the Kaesong Industrial Complex and Mount Kumgang tourism projects after the U.S. and North Korea failed to narrow gaps over denuclearization at their second summit in Hanoi, Vietnam, last month.

Andrew Kim, who retired as head of the CIA's Korea Mission Center late last year, is known for his deep understanding of North Korea policy. He reportedly said there are gaps between Washington and Seoul on North Korea policy and stressed the need for a closer alliance while attending an APARC-related meeting in Seoul on Wednesday. Kim also cited North Korea's demand for removal of U.S. strategic assets from Guam and Hawaii as one of the causes for the collapse of the Hanoi summit, according to news reports.

Shin said in a recent media column that what South Korea needs to do right now is not to mediate but to persuade North Korea to completely denuclearize. Kim is also said to have made similar remarks on several occasions.