SEOUL, March 22 (Yonhap) -- The number of foreigners who arrived in South Korea jumped by 15.2 percent in February from a year earlier as more visited the country during holiday seasons, the local tourism promotion agency said Friday.

A total of 1.2 million foreigners arrived here last month, up 15 percent from some 1.04 million a year earlier, according to the Korea Tourism Organization (KTO).

In the first two months of the year, a total of 2.3 million foreigners visited the country, marking a double-digit increase from 2018.

The number of Chinese tourists shot up 31.3 percent last month from a year earlier to some 453,000, accounting for 37.7 percent of the total.

Some 94,000 Taiwanese visited South Korea last month, a gain of 7.4 percent from the previous year.

The number of outbound South Korean tourists came to 2.62 million last month, an increase of 13.3 percent from a year ago.

Last year, 15.34 million foreigners visited South Korea, up 15 percent on-year, with the rise being due in part to a low base effect after visits by Chinese tourists plunged in 2017. 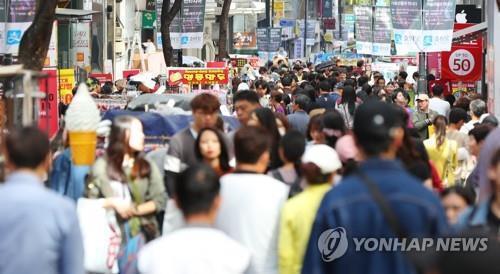 Number of foreign tourists to S. Korea up 15 pct in February

Number of foreign tourists to S. Korea up 15 pct in February