Kyohaksa, a Seoul-based publisher, issued a public apology on Friday for the controversial photo of the late Roh used in a reference book for the state-administered test for measuring Korean history knowledge and vowed to collect and destroy all the books in question.

The reference book carries a composite photo of a fictional Joseon Dynasty slave with Roh's face in a section on a television drama that aired on KBS in 2010. The photo caption says a fugitive slave is stigmatized after being captured. 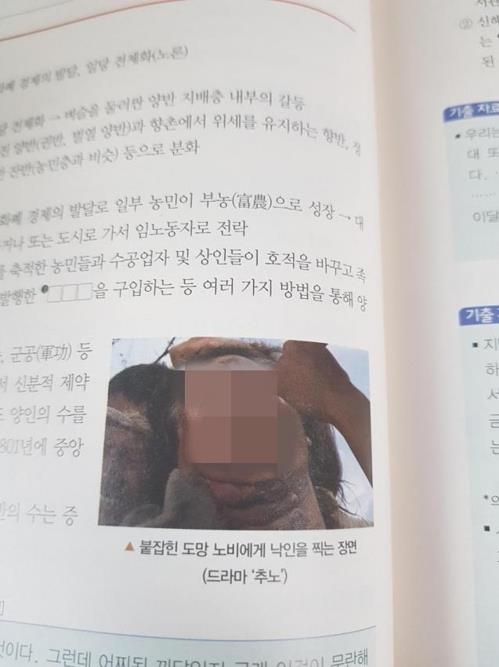 The existence of the controversial photo came to light after a netizen uploaded it on an Internet chatting website.

Roh, who was president from 2003 to 2008, is widely respected by liberal South Koreans and members of the ruling party. President Moon Jae-in served as Roh's chief secretary during his presidency.

Roh jumped off a cliff to his death behind his retirement home in May 2009, a year after leaving office, amid a widening probe by prosecutors over allegations that members of his family accepted illicit funds.

Kyohaksa posted a statement of apology on its website that said, "The incident occurred due to a simple mistake of our editing staff. But we sincerely apologize for failing to thoroughly examine the mistake in advance." The company also said it will take disciplinary punishment against the employees responsible for the mistake.

But some industry insiders suspect that it may not be a simple mistake by an editing staff for it has been left unfound for the past six months.

In 2013, under the rule of then-President Park Geun-hye, the publisher was embroiled in a controversy over its history textbook criticized for glorifying the country's past authoritarian governments.

Lee Hae-sik, spokesman of the Democratic Party, denounced the publishing company in a media briefing, saying the act is unpardonable and needs to be thoroughly investigated by the relevant authorities.