SEOUL, March 23 (Yonhap) -- You can take Mark Lippert out of South Korea. But you can't take South Korea out of the former U.S. ambassador.

Lippert, who served as Washington's top envoy to Seoul from 2014 to 2017, was back in the South Korean capital Saturday to watch his favorite Korea Baseball Organization (KBO) club, the Doosan Bears, host the Hanwha Eagles on Opening Day.

Currently vice president at Boeing International and senior adviser at the Center for Strategic & International Studies, Lippert was in China earlier in the week and hopped over to South Korea in time for the start of the 2019 season.

"Every day, I wake up, I walk the dog, and I watch KBO baseball," Lippert told Yonhap News Agency during the game at Jamsil Stadium, wearing a custom-made Bears uniform bearing his name in Korean on the back.

"I have a private sector job, and I also work for a think tank, CSIS. I still keep very active on Korean politics and North Korea," he said. "And I have two kids. I am busy all the time, but I do get to come back to Korea and watch baseball." 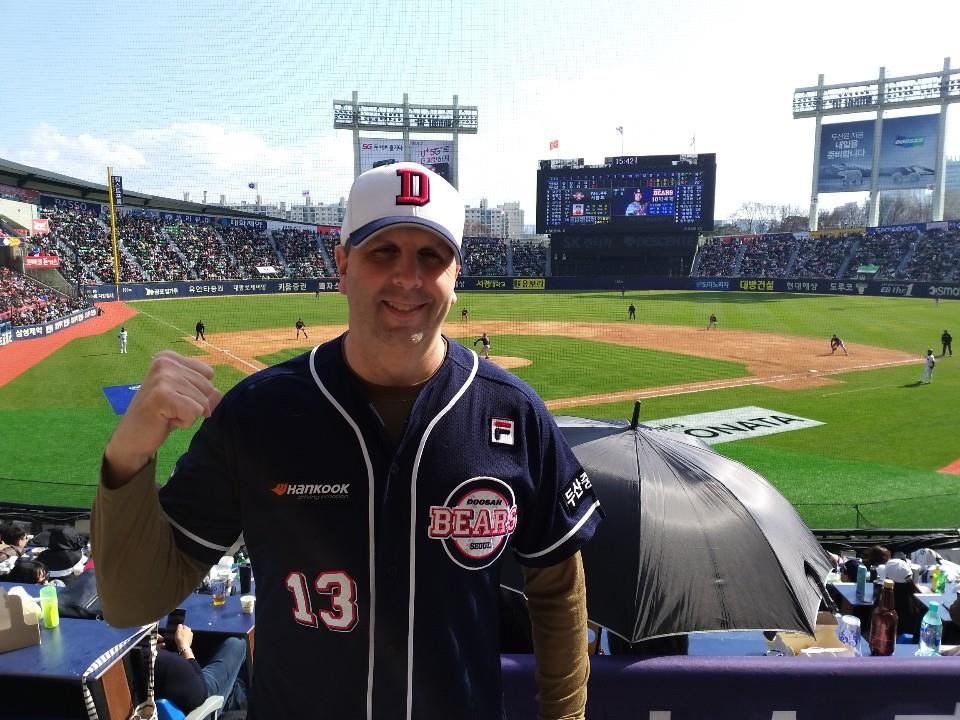 During his diplomatic tenure here, Lippert also served as an honorary ambassador for the KBO. The Bears were among the KBO's very best while Lippert was the U.S. ambassador, winning back-to-back Korean Series titles in 2015 and 2016. He attended several games during those postseason runs, even traveling out of Seoul for road games.

Though it's been more than two years since Lippert left, his love for KBO has never died.

"I made it to 11 games last year, and I am going to try to match that (this year)," he said, adding he attended games at four different stadiums in 2018.

The Bears were runners-up in 2017 and 2018. Lippert watched the Bears' Game 6 loss to the SK Wyverns in last year's Korean Series at Jamsil. The Bears were one strike away from forcing a Game 7, but Josh Lindblom, an ace starter pitching out of the bullpen, gave up a game-tying home run to Choi Jeong in the top of the ninth inning. The Wyverns went on to take the game in 13 innings.

Lippert said what happened then is already "history." Asked how well he thought the Bears will do in 2019, Lippert said, "They're going to win the whole thing this year."

"It should be a lot of fun. They have a lot of good players back," he added. "I am worried about Yang Eui-ji, but I still think we're going to be really good this year."

Yang is an All-Star catcher who left in free agency.

The Bears are once again regarded as a strong title contender. And if they reach the Korean Series again, Lippert said without a moment of hesitation, "I am going to be here, just like last year."

So what is it about the KBO that keeps him coming back to South Korea?

"I just love the sport. I am truly a crazy fan," Lippert said with a smile. "I love the cheering, I love the people. The best thing is, any time you find a Korean overseas or in Korea, generally, you're going to have a conversation about baseball."

Ex-U.S. Ambassador Lippert back in Seoul to watch baseball

Ex-U.S. Ambassador Lippert back in Seoul to watch baseball