SEOUL, March 23 (Yonhap) -- The Doosan Bears opened their quest for a second straight regular season crown in South Korean baseball with a 5-4 victory over the Hanwha Eagles on Saturday.

New Cuban hitter Jose Miguel Fernandez knocked in three runs, including two that broke the 3-3 tie with two outs in the bottom of the eighth inning, as the Bears took their home opener in the Korea Baseball Organization (KBO) at Jamsil Stadium in Seoul.

Fernandez, a former Cuban national team member, went 2-for-4 batting out of the sixth spot. 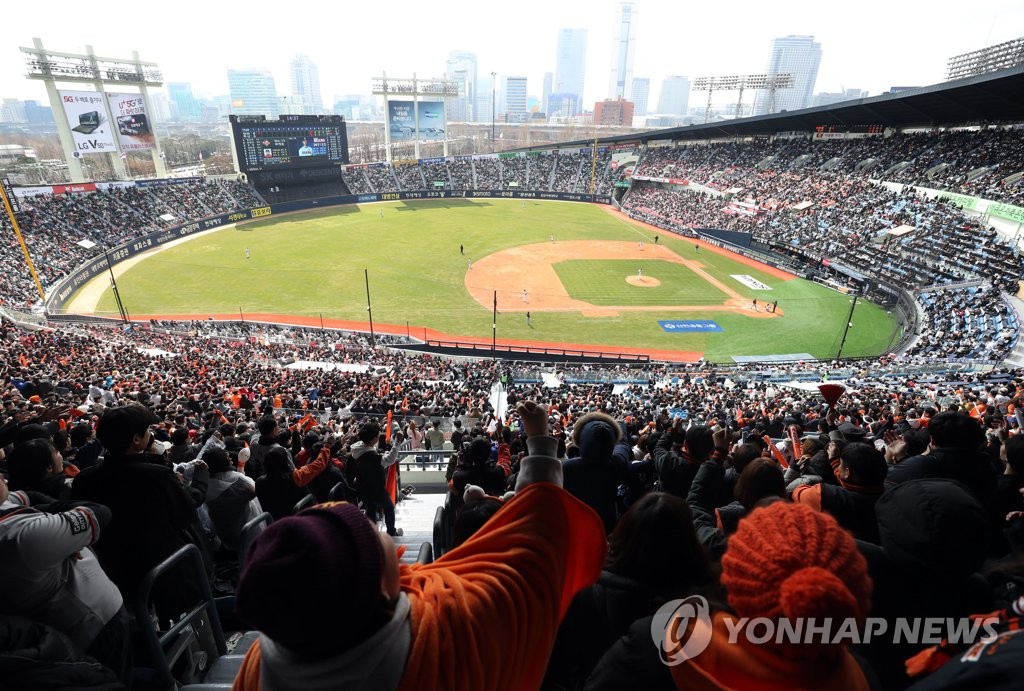 The Bears have played in each of the past four Korean Series, winning it all in 2015 and 2016 and finishing in second place the following two seasons.

The Eagles opened the scoring in the top third when Song Kwang-min delivered a double to left field off starter Josh Lindblom.

The American right-hander gave up four hits in the first two innings alone, and Jeong Keun-woo led off the third with a single before Song drove him home with the sixth hit off Lindblom.

The Bears erased the deficit with one swing of the bat in the bottom fourth, thanks to Park Kun-woo's two-run homer off starter Warwick Saupold.

Saupold no-hit the Bears through the first three innings, but Jung Soo-bin ended the no-no bid with a single to start the fourth before Park's long ball put the Bears ahead 2-1.

Lindblom had his first and only three-up, three-down inning in the fourth but was knocked around again in the fifth. A pair of singles put men at the corners, and Kim Tae-kyun tied the game for the Eagles at 2-2 with a single up the middle. 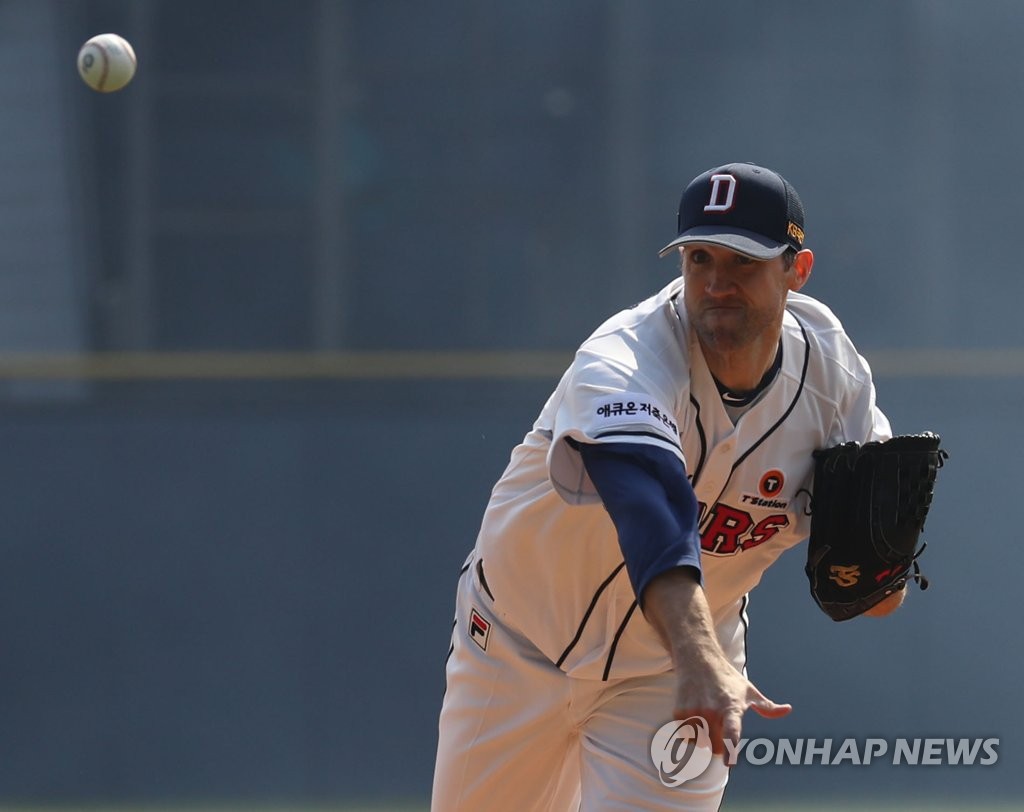 In the bottom sixth, Fernandez came through with a go-ahead single, making it 3-2 Bears and chasing Saupold from the game.

But the Eagles rallied once again as No. 8 hitter Choi Jae-hoon dumped a two-out single to right field.

It only set the stage for some late-inning heroics for Fernandez.

Out of the Eagles' bullpen, right-hander Song Eun-beom got two quick outs in the eighth inning. And with four consecutive left-handed hitters coming up, the Eagles sent in left-hander Kim Beom-su to try to close out the eighth.

Kim instead walked two straight batters on eight pitches. Right-hander Lee Tae-yang came on to clean up the mess, but Fernandez lined a double to deep left field corner to bring home both runners for a 5-3 lead.

"I am happy that I got a couple of hits that helped the team win," Fernandez said through an interpreter. "I am not going to be content with these two hits. I want to get a hit every time I am out there."

The Eagles loaded the bases with one out in the top of the ninth, but the best they could manage was a sacrifice fly by Lee Sung-yul.

Neither starter got a decision in this one. Lindblom scattered nine hits and gave up two runs in his 5 2/3 innings but he did strike out five and induced a double play ball with the bases loaded in the fifth inning. Saupold allowed three runs on five hits in 5 2/3 frames, with one strikeout against three walks.

"My command was kind of spotty today," he admitted. "But for the most part, I am happy that I was able to make pitches when I needed to in important situations." 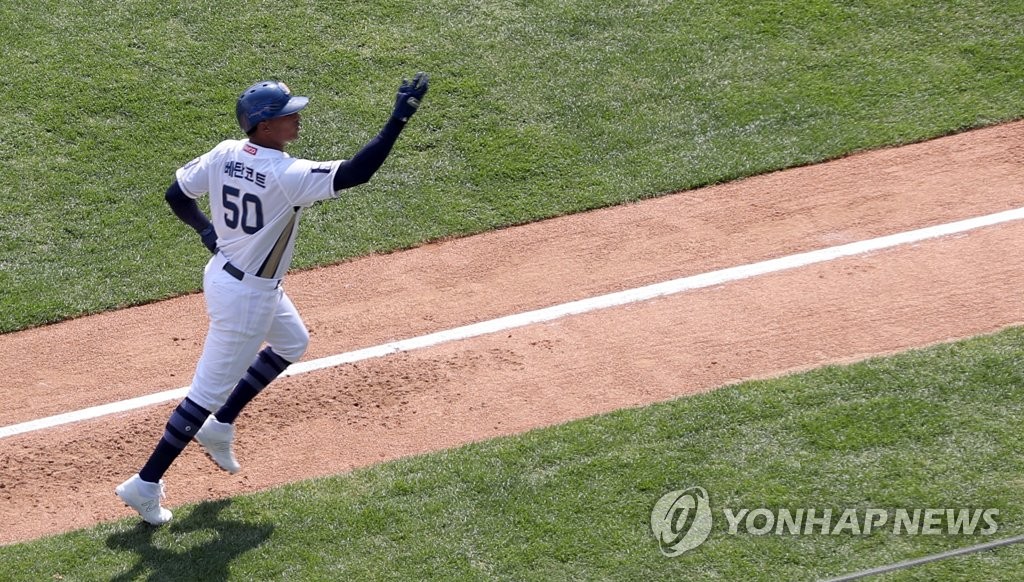 With the score tied at 4-4 in the bottom seventh, SK cleanup Jamie Romak hammered a two-run home run to put his team up for good. The Wyverns added another run in the bottom eighth.

The Wyverns have led the KBO in home runs in each of the past two seasons. They were already in midseason form Saturday, with the reigning Korean Series MVP Han Dong-min hitting a two-run shot in the first before Romak's blast.

Cleanup Christian Bethancourt launched the opening salvo with a three-run blast in the bottom first off starter Deck McGuire. It was also the first home run in the entire KBO in 2019.

Then Yang Eui-ji, a prized free agent acquisition, launched a solo homer for back-to-back jacks and a 4-0 cushion.

In the bottom second, No Jin-hyuk smacked a two-run home run to put the Dinos up 6-0.

With two outs in the fourth inning, McGuire walked four straight batters to concede his seventh run of the game. He was lifted after the fourth free pass that inning en route to taking the loss in his first KBO start.

The second-year right-hander held the Tigers to three hits and struck out four in his second straight Opening Day assignment.

Wilson's counterpart, Yang Hyeon-jong, allowed only one run while striking out eight in six innings, but was charged with the loss without any run support.

The Kiwoom Heroes pounded out 14 hits in a 7-4 victory over the Lotte Giants at Sajik Stadium in the southeastern city of Busan. Kim Ha-seong and Park Byung-ho each hit a solo home run for the Heroes, who capitalized on three errors by the Giants.