SEOUL, March 25 (Yonhap) -- There is little doubt that Jared Hoying had an outstanding first season in the Korea Baseball Organization (KBO) with the Hanwha Eagles in 2018. His numbers speak for themselves: a .306 batting average, 30 home runs, 110 RBIs, 23 steals and a league-high 47 doubles. Hoying was the only KBO player with at least 30 homers and 20 steals in 2018, as he helped the Eagles reach their first postseason in 11 years.

Those stats could have been even better, had it not been for a significant weight loss in the second half that saw him sputter toward the finish line. Hoying batted .266 in September, his lowest mark for a full month, and in his final six regular season games in October, he went just 3-for-23 with zero home runs and one RBI. 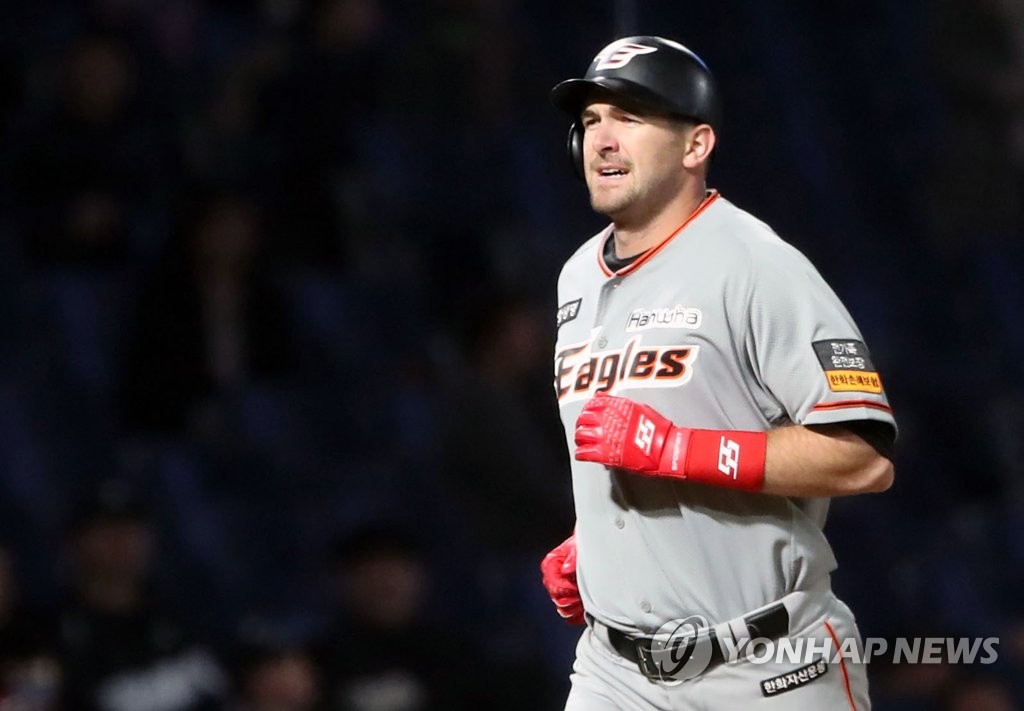 Hoying is back in the KBO for a second season having added some extra weight, which he hopes will lead to another productive season for himself and another playoff appearance for his club.

"I put on some weight this year, and I think I got up to 99 kilograms," Hoying told Yonhap News Agency on Saturday before the season opener against the home team Doosan Bears at Jamsil Stadium in Seoul. Hoying was listed at 92 kilograms at the beginning of last season.

"Hopefully, I can ride that out and keep on most of the weight this year," Hoying added.

He blamed his second-half swoon on a three-week, midseason break starting in mid-August, necessitated by the Asian Games in Indonesia. South Korea was going for a third straight gold medal with KBO All-Stars on the national team, and the league decided to put its regular season on hold to accommodate that.

"As a baseball player, you never want a three-week break during the middle of a season," Hoying said. "I think that affected a lot of things."

There will be no such stoppage in 2019, and Hoying will enjoy the sense of continuity, not to mention the added security of knowing his way around the league and the country.

"I am just more relaxed. I know my coaches and teammates and know how the system works," he said. "Food, travel, you name it, nothing is new anymore. Hopefully, it will lead to a lot more fun."

Hoying, who turns 30 in May, still plays with unbridled exuberance and joy. Winning a few games should add to the fun.

"(My goal) is pretty simple: Play hard and have fun and get back to the playoffs," he said. "As long as I am playing hard and having fun, everything else takes care of itself. I am a competitor. I am looking forward to trying to kick the other teams' butt. I hate losing with a passion."

Most pundits have picked the defending champions SK Wyverns, Doosan Bears and Kiwoom Heroes as the top three title contenders. They think the rest of the league is so even that the remaining seven teams will all have a chance to win the last two postseason berths.

So, Jared, are the 2019 Eagles playoff material?