PAJU, South Korea, March 25 (Yonhap) -- South Korean midfielder Lee Jae-sung said Monday he and his national teammates are determined to repeat the result they had against Colombia in 2017.

South Korea, 38th in the latest FIFA rankings, will host No. 12 Colombia at Seoul World Cup Stadium in Seoul on Tuesday. It will be their first meeting with the South American giants since November 2017, when they collected a 2-1 win at home.

Lee, 27, is one of the six players who faced Colombia in the 2017 friendly match in Suwon, south of Seoul.

"Compared to the 2017 friendly, both teams now have new coaches, so I think it's going to be a different match," Lee said at the National Football Center in Paju, north of Seoul. "But I believe our win in 2017 gave us a boost of confidence." 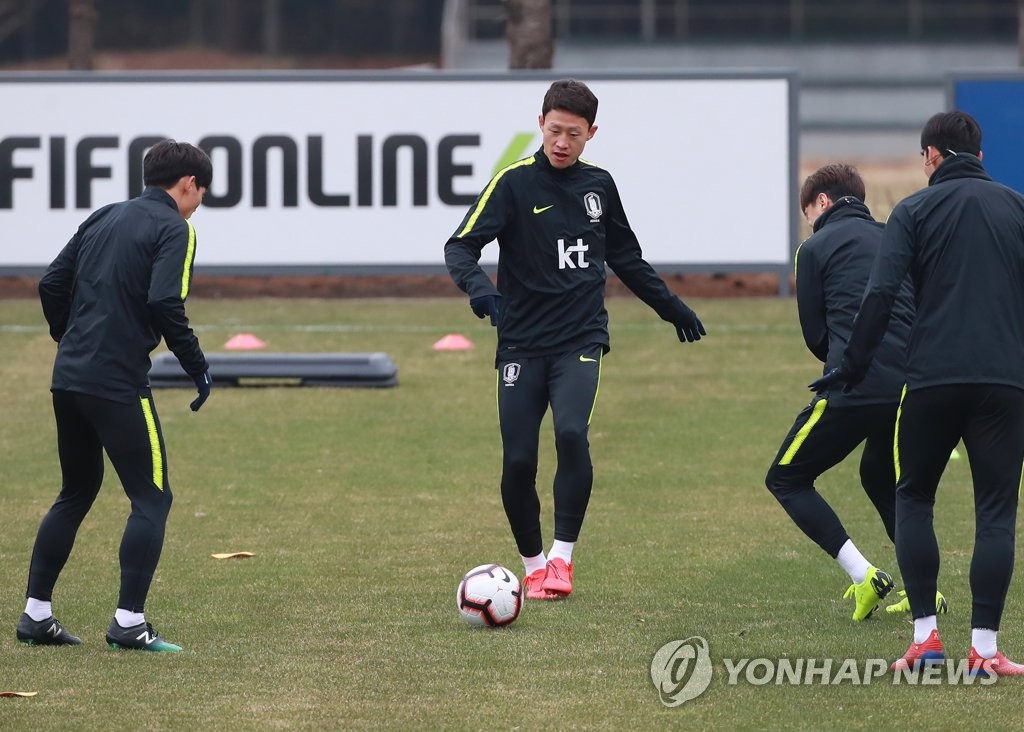 In 2017, South Korea beat Colombia thanks to a double by Son Heung-min. Lee, who has seven goals in 42 caps, played 83 minutes and helped his team win.

"I'm playing very well with Kwon Chang-hoon and Son Heung-min, who also played in the 2017 friendly," he said. "With confidence, we're all here to execute the coach's tactics and show our style of play. We're all working hard for a win."

Lee stayed on the bench in South Korea's latest friendly against Bolivia on Friday, watching younger teammates like Kwon, Na Sang-ho and Lee Seung-woo play in attacking midfield positions and contributing to the team's 1-0 victory.

But the Holstein Kiel midfielder said he is ready to perform on the pitch against Colombia.

"I wasn't able to compete against Bolivia because so many attacking players were in good form," he said. "I've given more effort to play against Colombia and I expect to play a good game with my teammates tomorrow."

Although competition for starting spots is tougher than in the past, Lee said the rise of young players on the national squad -- such as 18-year-old Valencia CF prospect Lee Kang-in and 19-year-old midfielder Kim Jung-min -- is a good sign.

"They are young, but they're talented," Lee said of his younger teammates. "I feel proud of them. I hope they work hard and can lift South Korean football's status in the world."