Golden Blue plans to put a premium distilled liquor product, developed by local alcoholic drink maker Omynara, on the domestic market as early as in the first half of the year.

It will be the first time for Golden Blue, known as the top local whisky brand of the same name, to introduce a premium distilled liquor product.

Golden Blue has plans to sell the envisioned product to Korean and Japanese restaurants, as well as bars that carry traditional Korean wines and soju, a distilled liquor.

Golden Blue's move is seen as an attempt to diversify its market amid plunging whisky sales in South Korea. Last year, the company won the exclusive right to sell Carlsberg beer in South Korea. 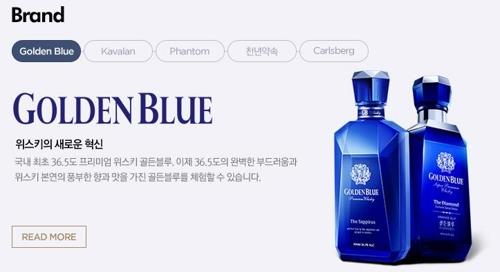 Whisky sales in South Korea have been cut in half over the past decade, with the market for premium spirits, including imported and craft beer, growing rapidly.

Golden Blue has been seeking to make inroads into the premium distilled liquor market since signing a deal on product development and distribution with Omynara, the farm ministry and the city of Mungyeong, about 184 kilometers southeast of Seoul.
(END)