BUSAN, March 27 (Yonhap) -- Ask Min Byung-hun, an All-Star outfielder in his second season with the Lotte Giants, what his goals are for 2019, and he will reach into his bag of baseball cliches -- not even that deep, either.

"I'll just keep taking it one game at a time, and that will add up to 144 games," said Min, referring to a full season in the Korea Baseball Organization (KBO), on Tuesday. He was speaking before the Giants' home game against the Samsung Lions at Sajik Stadium in Busan, 450 kilometers southeast of Seoul. 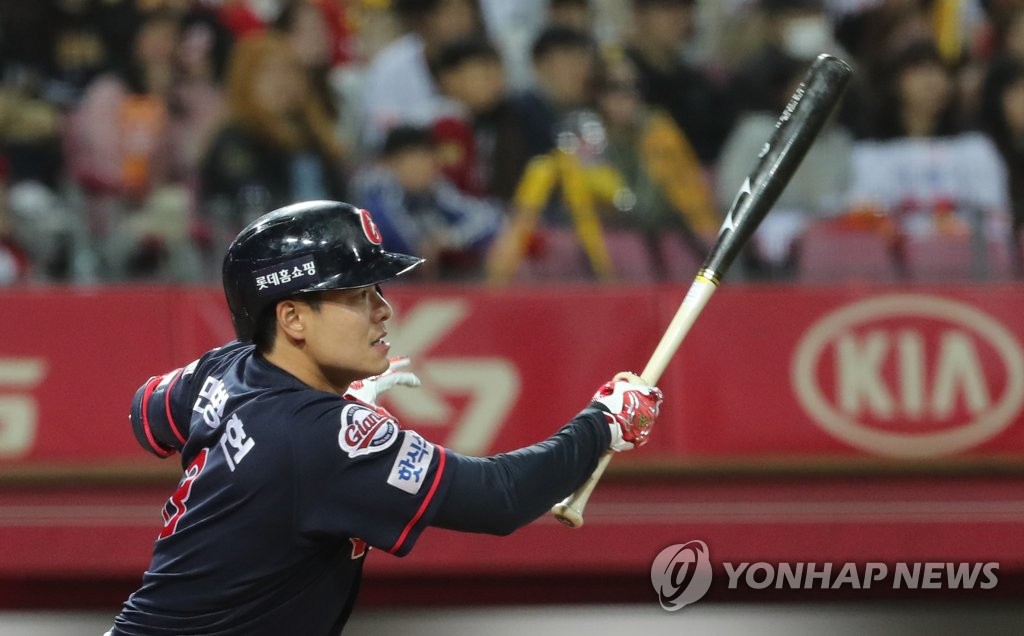 "I will try to be there for my teammates every step of the way," Min added. "I have no personal goals for the season."

It's in stark contrast with the beginning of the 2018 season, his first in a Giants uniform after arriving via free agency. Min signed a four-year, 8 billion won (US$7 million) contract with the Giants, following 11 years with the Bears. Min said he gripped his bat a little too tight early last season, trying to make an early impression, and it worked against him. Min batted 0-for-5 in his Lotte debut and was 3-for-18 out of the gate. The Giants lost their first seven games of 2018.

Min bounced back and ended up with a .318 batting average, for his sixth straight season of hitting at least .300. And one year under his belt has brought some comfort.

"I feel better than last year," he said. "I feel more relaxed now. I think I can really start swinging the bat well from today on."

And Min lived up to his words, batting 3-for-4 and scoring twice from the leadoff spot Tuesday.

Even in the one plate appearance when Min didn't get a hit, he worked Samsung starter Justin Haley to 12 pitches before striking out.

Min has batted at the top of the order in every game so far. Manager Yang Sang-moon originally had designs on putting new infielder Carlos Asuaje in the leadoff spot, but with Asuaje still coming along slowly, Yang has elected to go with Min.

Min has reached base 46 percent of the time so far.

"I don't really care where I hit in the lineup," Min said. "But if I do get regular at-bats as the leadoff man, I'll have to pay more attention to conditioning."

As a solid defender in center field, Min brings a lot to the table on the field. Off the field, the 32-year-old said he's been trying to be an elder brother-type leader and take his younger teammates under his wings because, well, they're all in this together and there's no I in team.

"I used to get all nervous and wound up like them. So I talk to these guys quite a bit and take them out for meals," Min said. "Those guys have to play well in order for our team to do well."