It would be their first meeting since the sudden collapse of a Hanoi summit between North Korean leader Kim Jong-un and U.S. President Donald Trump a month earlier.

Some media here raised the possibility of a rift between Seoul and Washington on a post-summit strategy, especially related to inter-Korean economic cooperation.

"(We) plan to share perceptions of developments in situations so far and discuss how (the two sides) will coordinate with each other going forward," Kang told reporters shortly before departing from Incheon International Airport. "I think it will be a good meeting."

She is scheduled to meet with Pompeo in Washington D.C. on Friday (local time) after participating in the U.N. ministerial meeting on peacekeeping in New York. 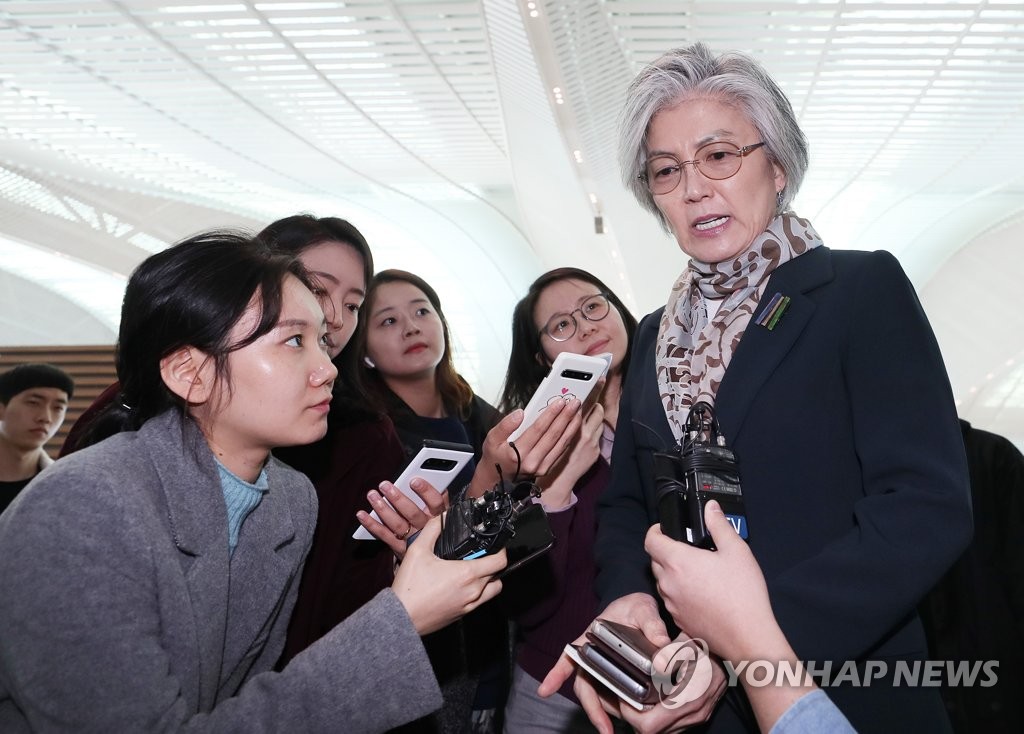 South Korean officials expect the Kang-Pompeo talks to serve as an opportunity to dispel doubts about the allies' coordination on the North Korea issue.

"The two sides will compare notes on the assessment of the current situations and discuss future steps in a calm manner," a foreign ministry official said. "It's good for Minister Kang and Secretary Pompeo to meet each other as often as possible."

The chief nuclear envoys of the allies will have talks in the U.S. capital this week as well. Lee Do-hoon, Seoul's special representative for Korean Peninsula peace and security affairs, plans to make a three-day visit there till Saturday, during which he will meet with U.S. Special Representative for North Korea Stephen Biegun.

Biegun traveled to Beijing for consultations with Chinese officials earlier this week.

The Trump administration has left the door open for dialogue with Pyongyang, while reaffirming a resolve to maintain sanctions until a "big move" toward dismantling North Korea's nuclear and missile program.

"I'm still hopeful that we can engage and negotiate with them and get to the right outcome," Pompeo said in a congressional hearing in Washington.

He added, however, "We have not yet seen them make the big move that we were frankly hoping that they would do in Hanoi."

Trump called for a sort of big deal with Kim. The North wanted sanctions relief for verifiably taking apart only its Yongbyon nuclear facilities.

Seoul believes that putting major inter-Korean projects in Kaesong and Mount Kumgang back in operation would help persuade North Korea to return to negotiations.

In contrast, Washington is concerned about speedy economic cooperation between the two Koreas with U.N.-led sanctions in place.

She threatened that Pyongyang could retract a moratorium on missile and nuclear testing unless Washington changes its attitude.

The North then withdrew its workers from a joint liaison office with the South. Following Trump's tweet that he had "ordered the withdrawal" of "additional large scale sanctions" against Pyongyang, some of the staff returned to work at the Kaesong office.