SEOUL, March 28 (Yonhap) -- Rival parties clashed over their assessment of the recent confirmation hearings for seven ministerial nominees on Thursday, with the ruling Democratic Party (DP) calling on its rivals to adopt a hearing report.

The main opposition Liberty Korea Party (LKP) is apparently seeking to reject parliamentary consent for their nominations, citing a lack of qualifications and ethical lapses.

Earlier this week, the National Assembly held hearings for the seven nominees chosen by President Moon Jae-in in early March as part of a Cabinet reshuffle setting up his administration for the second half of his five-year term.

Kim was criticized for what conservatives claim were pro-North Korea remarks that he had made in books and columns and on social media.

The LKP denounced Park, a DP lawmaker, for her refusal to turn in documents reflecting on her ethical standards that the party demanded to vet. LKP members boycotted a confirmation hearing for Park late Wednesday, citing her uncooperative attitude.

The ruling DP condemned the LKP for politicizing the hearings, claiming that the conservative party is seeking to impede President Moon's smooth management of state affairs.

"The LKP should immediately join the adoption of the confirmation hearing reports. If it sees them as unqualified for the posts, the party can write the reason for its opposition to the nominations in the reports," DP floor leader Hong Young-pyo said at a meeting with party members.

The National Assembly usually adopts a report on the outcome of a confirmation hearing as a procedural step needed for parliamentary consent.

Moon has appointed eight minister-level officials without parliament adopting hearing reports. A confirmation hearing report is not legally required for the appointment of a minister.

The conservative LKP called on Moon to withdraw his appointment of all the nominees.

"If (Moon) pushes ahead with the appointments, he will face resistance from the people," LKP chairman Hwang Kyo-ahn said at a meeting with senior party officials.

The party decided to demand Kim and Park withdraw from consideration as ministers.

"We regard all of the seven nominees as unqualified for the posts, but we will discuss whether to adopt hearings reports for the remaining five," LKP floor leader Na Kyung-won said.

At Wednesday's hearing, Park brought up the issue of the former vice justice minister who stands at the center of a sex scandal, intensifying tensions between the rival parties.

Kim Hak-ui has been freshly condemned over allegations that he received sexual services from a local developer and raped women at a sex party hosted by him. He was cleared of the charges in 2013, but a reinvestigation is expected to be launched into the high-profile sex bribery case.

Park claimed she showed a CD containing footage of Kim having sex with women to Hwang, the then justice minister, when she served as the chief of the judiciary committee in 2013.

Park told Hwang that Kim should not be appointed as vice minister, she added. Later, she revoked her remarks about showing the CD to Hwang and instead said she mentioned its existence to him.

The ruling DP unleashed an attack on Hwang, alleging that he would probably have been aware of sex scandal surrounding Kim.

The LKP defended Hwang, saying that the responsibility for an initial probe into the Kim scandal fell on Chae Dong-wook, the prosecutor general at the time. 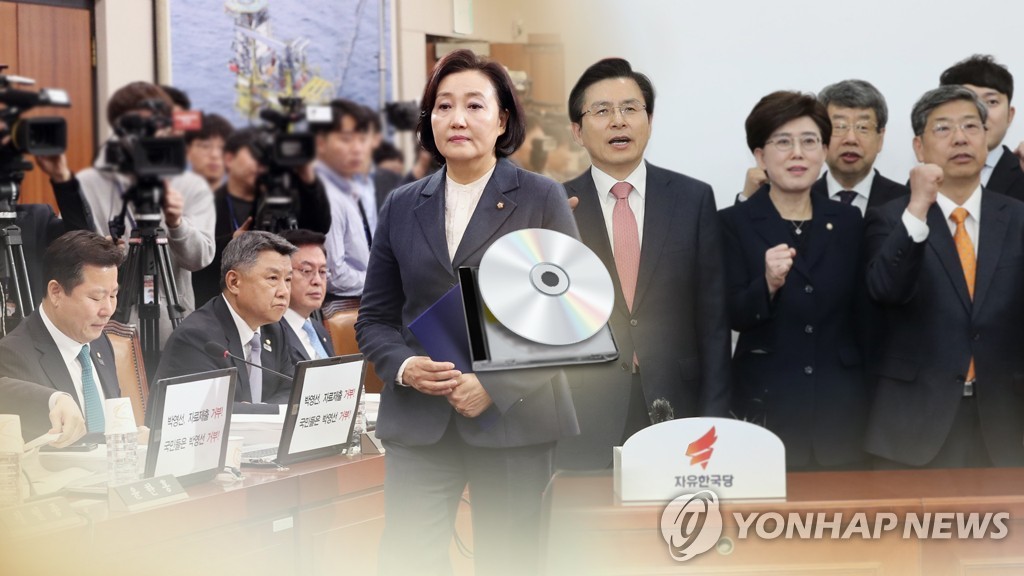