The agreement was reached in talks between Hong Nam-ki, the minister of economy and finance, and his Uzbek counterpart, Deputy Prime Minister Elyor Ganiev. Hong also doubles as deputy prime minister for economic affairs. 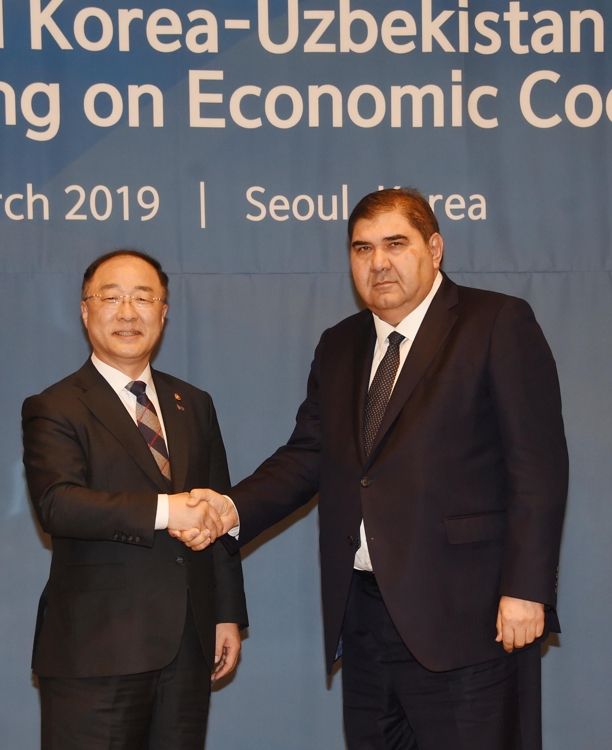 "We should ponder over what the demands of both sides are and how to produce a win-win (deal) through a joint study on an FTA," Hong said at the Second Korea-Uzbekistan High-Level Meeting on Economic Cooperation at a Seoul hotel, according to the Ministry of Economy and Finance.

South Korea has clinched a series of free trade deals with major trading partners, including the United States, the European Union and China, as well as Chile, Peru and Colombia, in recent years as part of its efforts to boost growth in the country's export-driven economy.

South Korea also agreed to set up a partnership program for economic innovation, which calls for the two sides to work together from an initial stage of planning projects to mid to long-term strategies for economic growth.

South Korea has become a donor country from being a recipient of U.N. aid in half a century, a transformation that has inspired many developing nations to follow in the footsteps of the Asian country in advancing their economies.

Uzbekistan said it will provide support to South Korean companies, which are seeking to tap into infrastructure projects in the Central Asian country.

S. Korea to push for joint study with Uzbekistan on free trade deal

S. Korea to push for joint study with Uzbekistan on free trade deal