SEOUL, March 29 (Yonhap) -- Police on Friday referred Jung Joon-young, a disgraced singer and TV personality, arrested a week ago for secretly filming himself having sex with women and sharing the footage with friends on mobile chats, to the prosecution to secure an indictment.

The 30-year-old Jung, who was put under arrest March 21 on charges of violating the Act on Special Cases Concerning the Punishment, etc. of Sexual Crimes, was moved from the detention room of the Jongno Police Station in downtown Seoul to the custody of prosecutors shortly before 8 a.m. 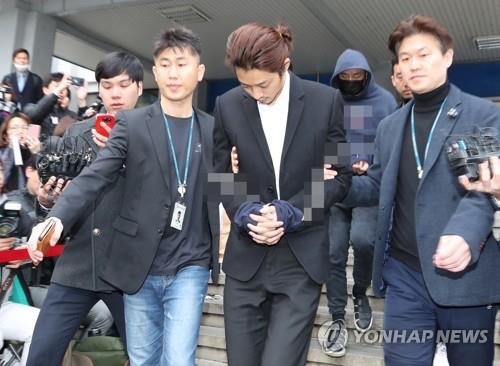 Jung, handcuffed and clad in a black suit, was approached by reporters asking if he had attempted to destroy evidence or has anything to say to his victims before boarding a prisoner escort van but declined to reply.

Jung is accused of recording sex videos of about 10 women he slept with and uploading them on a KakaoTalk messenger chat room in late 2015 to share them with other entertainers, including Seungri, a member of K-pop boy band BIGBANG.

Police also transferred an employee of a Seoul night club named Burning Sun, which is known to have been partially invested by Seungri, to prosecutors on charges of sharing Jung's illegal videos in mobile chats.

Seungri himself has also been under a probe over the sex tapes and a slew of other charges that include arranging escort services for prospective investors.

Seungri, 29, was a public relations director for Burning Sun where suspected illegal drug use and sexual violence occurred.

Police are also expanding investigations into the nightclub business over allegations of cozy ties between its owners and police, with a ranking police officer suspected of having helped them cover up their illicit acts in the past.