SEOUL, March 29 (Yonhap) -- South Korea sold a net US$187 million worth of foreign currencies to stabilize the market in the latter half of last year, the central bank said Friday.

The Bank of Korea (BOK), which posted the information on its website, said the funds were used to deal with sudden sharp fluctuations that can negatively impact the economy.

It is the first time that South Korea made public such records in order to improve transparency in its economic and monetary policies.

The Korea won hovered around a range of 1,100-1,150 won against the U.S. dollar over the six-month period, with the average daily variation of the won-dollar rate coming to 4.0 won.

"The FX market was very stable last year," a BOK official said. "The authorities have intervened in the FX market only to a limited extent in order to minimize any overshooting."

The BOK will unveil the records for the first half of this year in September, and quarterly releases of this information will begin in the third quarter of 2019.

But the official said the central bank has no plans to give more detailed data on its market stabilizing measures in the near future.

In May last year, Asia's fourth-largest economy decided to disclose the half-yearly turnover of its foreign exchange market operations in an effort to clear itself of suspicions of exercising undue influence on exchange rates to support exports.

South Korea's financial policymakers have consistently claimed they do not interfere in the foreign exchange market but only engage in "smoothing operations" against extreme one-sided movements.

South Korea had been the only nation that did not reveal the turnover of market interventions among the 36 members of the Organization for Economic Cooperation and Development (OECD). 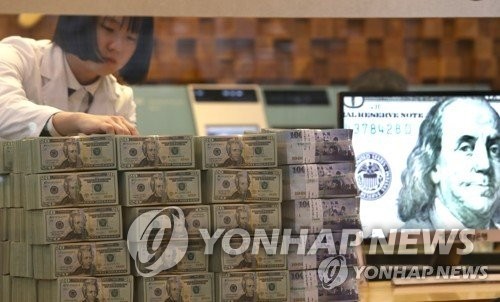