In the poll, of 1,003 adults, conducted by the leading pollster nationwide from Tuesday to Thursday, only 43 percent said they approved of Moon's job performance as president, down 2 percentage points from the previous week.

The reading of 43 percent marked the lowest figure for Moon, who took office about two years ago with an approval rating of over 80 percent. 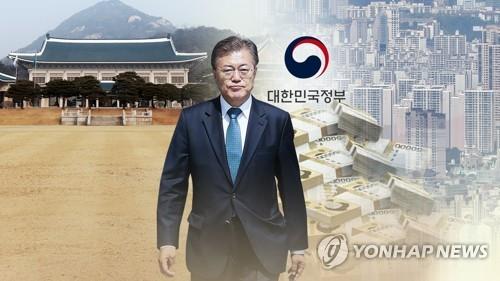 It is the third time, after the third week of last December, and the second week of this month, that Moon's disapproval rating has exceeded his approval rating. The poll has a margin of error of plus or minus 3.1 percentage points, with a confidence level of 95 percent.

Respondents with an approval opinion cited Moon's contribution to improving inter-Korean relations, while those with a disapproval opinion criticized the president over worsening economic and livelihood problems.

The approval rating of the main opposition Liberty Korea Party inched up by 1 percentage point to 22 percent, the highest figure since Moon's inauguration, it said.