The two vehicles ranked 44th and 78th in 2018, with the exclusion of the Grandeur, being particularly significant, Brandstock Corp. said.

The near-luxury full-size passenger car had consistently ranked among the most recognized brands since the car hit showrooms in South Korea in 1986.

In addition, the latest findings showed Hyundai's high-end sub-brand, the Genesis, sliding to 28th place in the January-March period from 26th for the whole of last year.

"Starting from 2017, when the diplomatic crisis with Beijing caused by the deployment of the U.S. anti-missile system here impacted Hyundai, which relied on the Chinese market, the carmaker's standing has been falling," the corporate brand evaluator said. 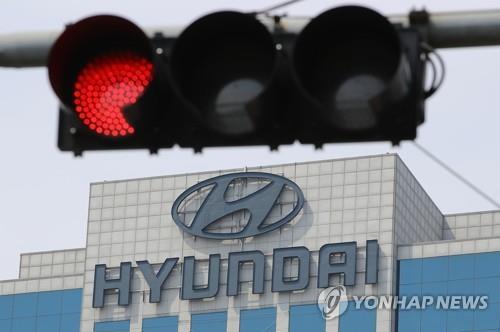 It said that other locally made vehicles, like the Chevy Spark city car, made by GM Korea Co., and Tivoli, a small crossover by SsangYong Motor Co., all lost ground falling, to 82nd place and 94th place, respectively, in the three months of this year.

On the other hand, German luxury carmaker's overall brand standing surged by 15 steps to 80th place this year, on the strength on robust sales in Asia's fourth-largest market.

The latest findings showed that Samsung Electronics Co.'s Galaxy brand held onto the first place slot, which it has retained for eight straight years, with E-Mart Inc. the country's largest discount hypermarket chain, and top mobile messenger KakaoTalk coming in at second and third place.

Brandstock's rating is based on brand stock top index that evaluates both stock trading value and consumer assessment to come up with a ranking.
(END)