The overall sales figure was affected by continuing sluggish demand in overseas markets, such as China and emerging markets, amid a slowdown in growth. 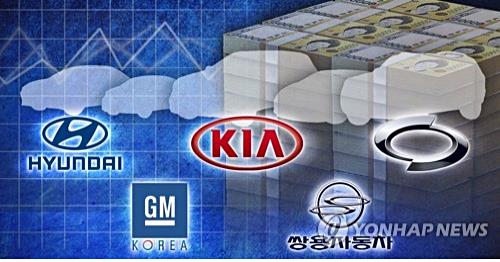 Hyundai's sales fell 2.2 percent to 389,160 units last month from 397,747 a year ago as overseas demand for its vehicles failed to improve in China and other emerging markets.

The maker of the Sonata sedan said the planned launch of the Palisade sport utility vehicle in the United States this year is expected to give a boost to sales. Domestic sales of the all-new Santa Fe and the Palisade SUVs were strong last month.

Sales of its 34 percent-owned affiliate Kia remained virtually unchanged at 242,617 autos compared to 242,608 the previous year.

This year, the two carmakers said they will focus more on reviving sales in the U.S. and China, the world's two most important automobile markets, by launching their new SUV models, including Kia's Telluride SUV.

But it remains to be seen whether the U.S. and China will come up with a major breakthrough in their trade talks due to take place this week in Washington.

The two carmakers have set a conservative target of 7.55 million vehicles for 2019 after missing their sales goal for 2018. They sold 7.4 million units last year.

They have been struggling with a decline in sales in the world's two biggest markets following a failure to recognize consumers' growing appetite for SUVs.

Hyundai plans to launch the Palisade flagship SUV in the U.S. to stimulate sales this year, while Kia has already begun to sell the Telluride SUV in the U.S.

GM Korea reported a 4.2 percent on-year gain in sales last month -- selling 42,996 vehicles, up from 41,260 -- on increased sales of the Trax compact and Equinox midsize SUVs.