SEOUL, April 2 (Yonhap) -- South Korea's Marine Corps is seeking to expand its role in response to "dynamic changes" in the security environment surrounding the peninsula, its chief said Tuesday.

Speaking at a forum celebrating the 70th anniversary of the armed service's establishment, Commandant Lt. Gen. Jun Jin-goo also stressed the "strategic value" of the Marines in enhancing South Korea's security down the road.

"The neighboring countries around the peninsula have been forming complicated dynamics due to political, historical and territorial issues," he said.

"In such a security environment, our Marine Corps has been seeking to expand its role through such ways as operating a rapid maneuver unit and developing a concept for the defense of strategic (front-line) islands," he added.

Jun also said that his service and the U.S. Marine Corps have been striving to bolster their combined defense capabilities through command post drills and amphibious landing exercises, including ones outside the peninsula.

"The South Korean and U.S. Marines will continue to play a pivotal role in promoting security on the peninsula in the future," he said. "To this end, we will try harder to strengthen the cooperative mechanism for combined operations."

The commandant, moreover, reiterated his desire to incorporate cutting-edge technologies such as drones into his armed service's troop training and education, as well as other day-to-day operations.

"We will prepare for the future through military innovation in various sectors," he said. 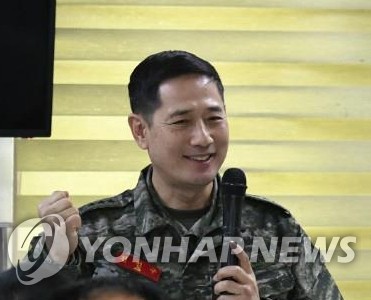