According to the National Institute of Ecology, affiliated with the environment ministry, its researchers discovered that the bird, which is about 40 centimeters long, had wintered on the island of Okinoshima, Shimane Prefecture, western Japan, through a study using a smartphone-based tracking device attached to a common wood pigeon living on the South Korean island.

Ulleung Island is South Korea's largest habitat for the common wood pigeon, a large species in the dove and pigeon family. About 500 individuals are found on the island during a breeding season that lasts from March through August. They are not present there during winter, however.

After attaching a WT 300 tracking device, developed in South Korea, to the bird from June 2017 to April last year, the researchers managed to acquire information on how the bird spent the winter season.

The information showed the bird flew from Ulleung Island on Sept. 20, 2017, and arrived on Okinoshima, about 280 kilometers in a straight line from the South Korean island, the same day.

After spending 208 days around the Japanese island, it came back to Ulleung Island on April 16, 2018, the think tank said.

The tracking system, which uses a smartphone network, is cost-effective. Its cost is only one fifth as much as a satellite tracking system and weighs 27 grams, paving the way for it to be widely utilized in ecological research operations. 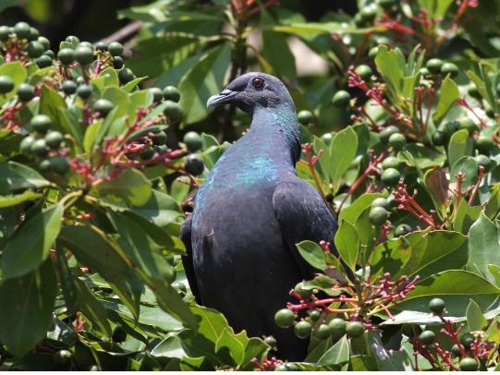 Pigeon on S. Korean island confirmed to have wintered on Japanese island

Pigeon on S. Korean island confirmed to have wintered on Japanese island