In Washington on Tuesday, U.S. Joint Chiefs of Staff (JCS) Chairman Gen. Joseph Dunford conferred the Legion of Merit, a top award given to a foreign military official, on the minister for his role in cementing the relationship between the allies and promoting peace on the peninsula.

Jeong, who served as the South's JCS chief from August 2017-September 2018, was in Washington for talks with acting Secretary of Defense Patrick Shanahan and other events.

"This decoration is given not just to me, but it is one that I receive on behalf of all South Korean troops," Jeong said. "I will do my utmost for the honor of both South Korean and U.S. troops, and the enhancement of the robust South Korea-U.S. alliance."

Dunford praised the leadership and insights that the minister showed during his term as South Korea's JCS chairman, according to the ministry.

Before the award ceremony, Jeong and Dunford held talks on the security situation on the peninsula and other pending alliance issues.

"Minister Jeong and JCS Chairman Dunford agreed to continue close cooperation over the goal of the complete denuclearization of the peninsula and the establishment of peace, while sharing the view that the South Korea-U.S. alliance stands as a linchpin of peace and stability on the peninsula and in Northeast Asia," the ministry said in a press release.

Also on Tuesday, the minister met separately with Senator Cory Gardner, the chair of the Foreign Relations Subcommittee on East Asia, and Adam Smith, the head of the House Armed Services Committee.

During the talks, Jeong explained the security situation on the peninsula and called for continued U.S. congressional support for the alliance.

"Minister Jeong explained that the defense authorities of South Korea and the U.S. maintain a readiness posture to respond to any security challenge while militarily backing the two countries' diplomatic efforts for the denuclearization and establishment of (lasting) peace on the peninsula," the ministry said.

Gardner and Smith said that the U.S. Congress will continue cooperation over peace efforts on the peninsula, according to the ministry. 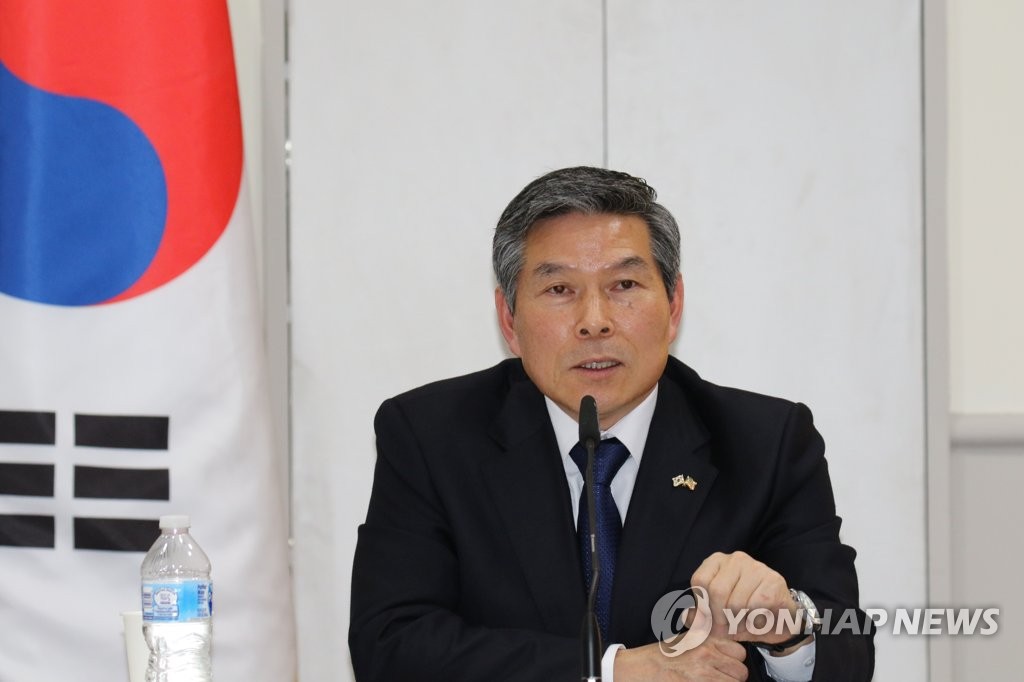