The reopening of Ahn's memorial hall was briefly advertised in local media but took place quietly without a ceremony at Harbin Station, according to Chinese officials.

An official of the memorial hall contacted by Yonhap News Agency on Tuesday confirmed the absence of a reopening ceremony, saying there is also no event planned in connection with the reopening. 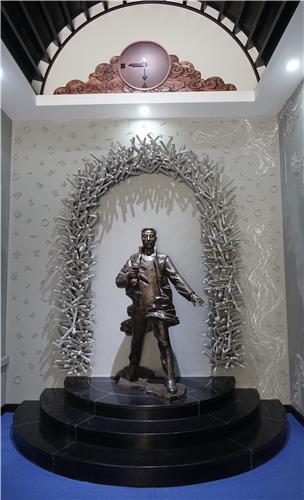 Ahn's memorial hall was first built at Harbin Station in Harbin, Heilongjiang Province, in January 2014 to commemorate his assassination of a top Japanese colonial official there more than a century ago.

Ahn shot the Korean Peninsula's first Japanese governor-general, Hirobumi Ito, to death at Harbin Station on Oct. 26, 1909, before being executed by colonial Japan on March 26, 1910, at the age of 30.

The memorial hall was moved to an ethnic Korean arts center in Harbin in March 2017 due to renovation work at the railway station. Harbin Station reopened last December.

The station official said it is not certain whether a ceremonial event marking the 110th anniversary of Ahn's heroic act will take place at the station in October this year.

"Nothing has been fixed (about a ceremony in October). We need to watch because there is still a lot of time," the official said.

In 2015 and 2016, the Seoul-based Association for the Commemoration of Patriotic Martyr Ahn Jung-geun hosted a memorial service at the Harbin Station hall to remember the assassination by Ahn.

The entrance to Ahn's memorial hall, located on the left side of the station's main entrance, can be difficult to find as there is no separate sign at the facility.

However, inside the memorial hall, symbols that emphasize the historical significance of Ahn's patriotism were clearly displayed, indicating the Chinese authorities paid considerable attention to its interior.

Inside the entrance to the memorial hall, Ahn's full-length statue is on display, with a hat in his clenched fist. The statue stands on a shape of the Korean Peninsula, and a mix of Korean and Chinese characters behind it indicates his contribution to the liberation of Korea and China, according to a memorial hall guide.

Above the statue, there is a clock-shaped sculpture pointing at 9:30, the time of Ahn's assassination of Ito.

The station has also restored two platform floor markings commemorating the assassination of Ito on the ground of Platform No. 1: a triangle marking where Ahn pulled the trigger and a square marking the position of Ito's collapse.

The two marks had been removed because of the station's renovation work.