SEOUL, April 3 (Yonhap) -- South Korea will open to the public three hiking trails leading to the Demilitarized Zone (DMZ) separating the two Koreas starting late this month as part of efforts to have visitors experience inter-Korean peace and the security situation on the Korean Peninsula, government officials said Wednesday.

In the regions, South Korea has taken tension-reducing measures under a deal on Sept. 19 last year with North Korea that include removing some border guard posts and a joint project to excavate Korean War troop remains in the DMZ. 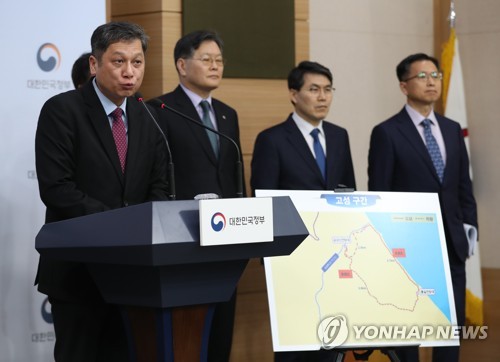 The trail project has been promoted by the interior, culture and tourism, unification, defense and environment ministries.

Late this month, the government will open the Goseong trail first as a pilot program before operating the walking tour permanently.

The Cheorwon trail connects a Baengmagoji Battle monument to a road along a barbed wire fence and a guard post at Arrowhead Ridge, a site of fierce battles in the 1950-53 Korean War.

In the Paju area, walkers start from the Imjingak Pavilion and tour a demolished guard post via the Dorasan Observatory.

The three trails are expected to be linked to government projects to make a trail crossing the peninsula along the buffer zone and to build a peace park inside the DMZ. 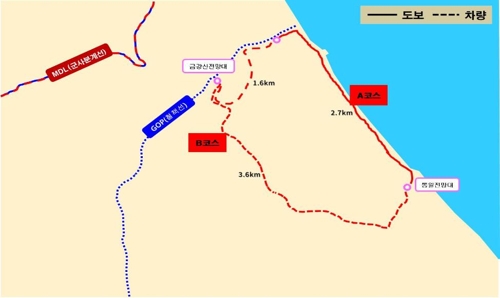 Visitors to the trails are protected by South Korean soldiers. During their trip there, they will be given protection equipment such as bullet-proof vests and helmets.

The defense ministry is in talks with the U.N. Command to discuss measures to control entry into the DMZ and ensure visitors' safety. The UNC oversees activities within the buffer zone.

The government will set a maximum number of people allowed to visit the trails, taking into consideration military operations and environmental and ecological issues.

People wanting to walk along the Goseong trail can apply through the interior ministry's website and the Korea Tourism Organization's website starting April 11. The two government bodies will select successful applicants at random.

The government will invite the public to take part in a contest to help come up with an official name for the trails later this month.

Despite the mood of inter-Korean rapprochement, concerns remain that civilian access to the front line, albeit restricted, could pose safety risks to tourists and disrupt border defense operations.

Due to such risks, the government appears to have decided to first open only the Goseong trail in a revision of the original plan to allow access to all three trails this month.

Although the two Koreas have demolished or disarmed 11 DMZ guard posts apiece, there are still 150 heavily armed guard posts north of the Military Demarcation Line and 50 south of it.

Asked why they put on hold the plan to open the Paju and Cheorwon trails inside the DMZ, the government said that access to them will be granted after "preparations for receiving visitors." It is reportedly mulling opening the two trails in May or June.

Mindful of the concerns about the potentially negative impact of the trails on frontline military operations, the defense ministry said that the trails open to the public are located in areas that do not affect border defense missions.

"We have taken steps to allow access in a way that does not affect our border operations, while keeping a firm readiness posture," the ministry said in a statement.

It added that it is devising "thorough safety management" measures to support DMZ visitors.

Safety steps aside, the government has crafted measures to minimize any harmful effect on the hitherto well-preserved DMZ ecology.

Seoul has shown confidence in the DMZ trail project, as the two Koreas have been engaged in a series of trust-building and arms control measures, such as disarming the Joint Security Area in the DMZ under the goal of halting "all hostile acts" against each other.

But these measures have recently lost steam as Pyongyang is lukewarm about them following the collapse of the second summit between U.S. President Donald Trump and North Korean leader Kim Jong-un in Hanoi in February.